EA is taking an interesting approach to pivot away from the lootbox-based monetization that makes the company billions every year. 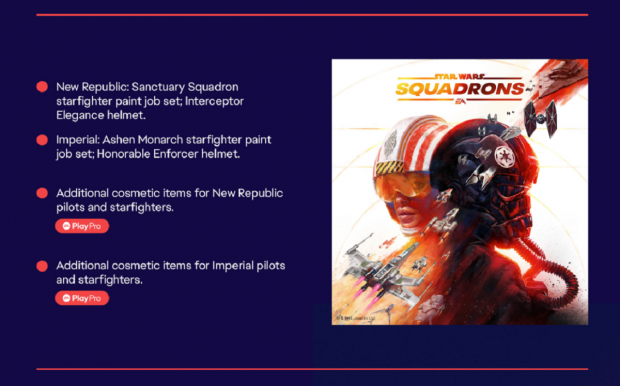 While scouting the new EA Play webpage, I noticed something interesting: EA Play Pro (formerly Origin Access Premiere) subscribers will get exclusive cosmetics in Star Wars Squadrons. I don't mean a little reward or just a single skin, but an entire series of unlockables that aren't available for normal players. This could be a new trend for EA to move away from in-game microtransactions.

Remember that Star Wars Squadrons doesn't have in-game purchases. It's an odd move because the game is prime territory for mTX; it has online-based play with replayable missions, it has tons of unlockables and cosmetics, and, well, it's Star Wars. The game is also $40. EA CFO Blake Jorgensen explains why the game doesn't have mTX (an anomaly for EA): "Our games are on different scales. We designed Squadrons to really focus on Star Wars dogfighting fantasy. It doesn't have the breadth of some of our games and we wanted to make it more widely available (cross-platform, cross-play, VR)."

Now we have a better understanding on EA's future moves, at least with smaller-scale games.

Expect this trend to continue with future games. EA is clearly trying to add more value to its value-oriented EA Play Pro subscription, which is probably getting absolutely battered by Game Pass right now. The big draw to EA Play Pro is being able to play EA games day and date of release, similar to Microsoft's approach to Game Pass.

Exclusive cosmetics are just the beginning. EA Play Pro subscribers could actually get access to exclusive quests in, say, Dragon Age 4, or exclusive maps in Battlefield 6.