A new trademark filing adds even more evidence of a next-gen Gran Turismo launching alongside the PS5 in 2020. Sony and Polyphony Digital just filed new trademarks for Gran Turismo on Argentina's National Institute of Industrial Property database, strongly hinting at a PlayStation 5 release. The filings were made on June 3, just a day before the originally-planned PS5 games reveal event. There were also filings for a Gran Turismo logo.

This development isn't the first time we've heard about a next-gen Gran Turismo. Back in 2018, Sony showcased Gran Turismo running on its new 8K CLEDIS display technology, which the PlayStation 5 will of course support. Polyphony Digital also said GT Sport's assets went beyond just 1080p and 4K. Some were made specifically in 8K and should translate directly over to the PS5 GT release.

Fast-forwarding to 2020 and we see an advertising slip-up from peripheral-maker Next Level Racing, who might've outed the PS5 racer. It wasn't exactly a surprise though.

So what can we expect from Gran Turismo 7 (or whatever it's called)? This will be a huge next-gen spectacle for the PlayStation 5 and should completely exhibit what the system is capable of. Expect it to be one of the first 8K resolution games on the platform, expect high-end graphical effects like hardware-driven ray tracing, global illumination, next-gen fog and atmospheric effects--the works.

The game should also tap the PlayStation 5's new DualSense controller, which is driven by haptic feedback rumble tech.

Sony should reveal the new Gran Turismo during its PlayStation 5 launch games event, but the show has been delayed to an undetermined time. 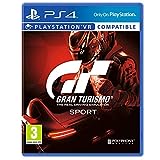