The custom Cyberpunk 2077 Xbox is the best-looking custom Xbox One X to date, and comes with a ton of extras to sweeten the pot. 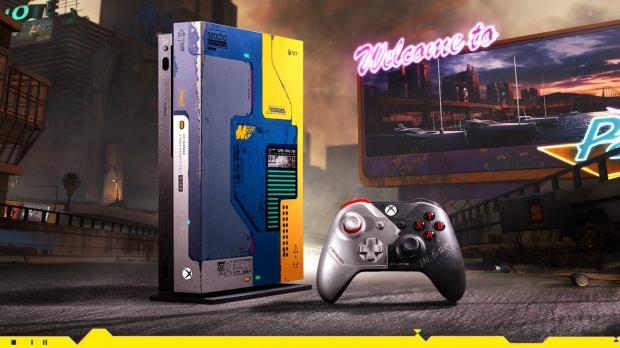 The new Cyberpunk 2077 console will close out the Xbox One X's lifecycle, and Microsoft is making sure it goes out with a bang. The $300 limited edition Cyberpunk 2077 Xbox One X will be quite rare, limited to just 45,000 units worldwide, but that kind of availability allows for some pretty big extras like a free copy of Cyerpunk 2077 and free access to the game's first major paid expansion.

The news was confirmed in a recent Best Buy listing which reads: "Enjoy a full-game digital download of Cyberpunk 2077 (available September 17, 2020), as well as the future first expansion release, on the 1TB limited edition console that uses textures, glowing elements, bright panels, and color shift effects to capture the vibrant grit and technical enhancements of Night City."

The custom Cyberpunk 2077 Xbox One X will be available this month, but you obviously can't access the game until September.

With the next-gen Xbox Series X launching a few months after Cyberpunk 2077's release in September, it's important Microsoft sweetens the pot as much as possible for this particular bundle.

Like the rest of the Xbox One family, the Xbox One X will be quite outdated once the Series X drops in Holiday 2020. But even still the Xbox One X is still positioned as the best future-proofed console insofar as specs thanks to its beefy 6TFLOP Polaris-powered GPU.