A neat little infograph from SatelliteInternet compiles Google Trends data to see which retro consoles U.S. states like the most. 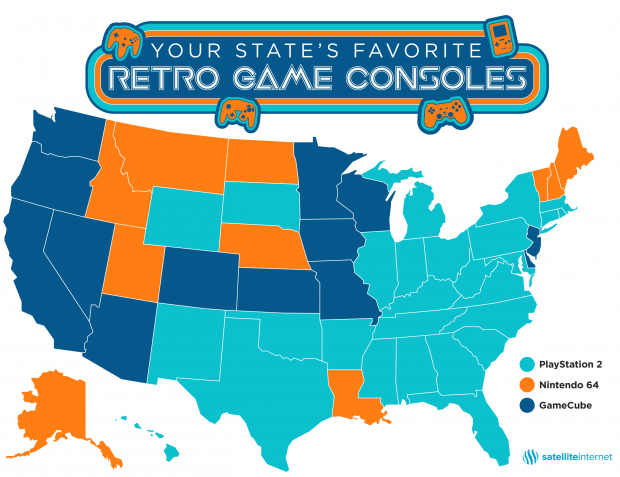 The data compares current interest in three systems across the continental United States--Gamecube, Nintendo 64, and PlayStation 2. The info isn't representative of total historic console hardware or software sales, but moreso the overall current Google Trends data. Basically the idea here is to see what retro console that each state is currently searching for.

So far the PlayStation 2 is the most popular. These findings show gamers are more interested in replaying old PS2 games than other systems. Second is GameCube, which is interesting considering the Nintendo 64 has outsold the GameCube by 11 million units in lifetime sales. Still, though, the GameCube's game library is more mysterious and harder to find. The N64 takes last place in overall U.S. state interest.

The East Coast loves the PlayStation 2, with the exception of Maine, who'd rather play on a Nintendo 64.

Utah, Idaho, and North Dakota are Nintendo 64 fans-maybe feeling nostalgic for the '90s?

Although Game Boy is one of the most popular retro consoles nationwide, it didn't top the list as the favorite for any state.

The Legend of Zelda: Ocarina of Time