Millions of Americans have been enjoying Super Bowl 2020 festivities today, with Marvel dropping a 30-second teaser of its upcoming Disney+ shows.

We've had a triple-teaser of The Falcon and the Winter Soldier, the mysterious Loki series, and WandaVision. Starting with The Falcon and the Winter Soldier, which sees the return of Anthony Mackay as Sam "Falcon" Wilson and Sebastian Stan as Wilson as Bucky "Winter Soldier" Barnes, with their series kicking off right after the MCU arc at the end of Avengers: Endgame where Captain America hands Falcon Cap's shield. We also see a brief tease of Zemo, the villain in Captain America: Civil War.

The super-brief tease of Loki sees Tom Hiddleston back in the titular role, where he simply says "I'm gonna burn this place to the ground" -- but it is WandaVision that could be quite the fun, and most likely very sad ride. Elizabeth Olsen returns for her role as Wanda Maximoff, joined by her love Vision, played by Paul Bettany.

It begins with scenes of them in a house, with what seems to be the characters going through different eras in American history in a sitcom-like show. I'm sure we'll see Wanda using her powers to continue being with Vision in a happy place, after their ending in the MCU.

The Falcon and the Winter Soldier and WandaVision will both debut in 2020, exclusive to Disney+ while we're still waiting on a release window for Loki. 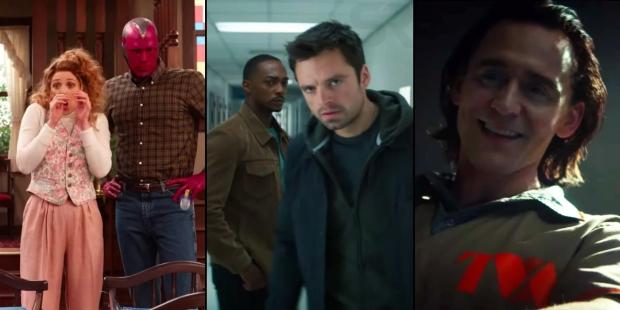