ASUS has idle fan stop that disables the fans when the card isn't being stressed, RGB lighting (of course), and 8+6-pin PCIe power connectors. 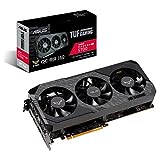