NetherRealm Studios has revealed the official roster for the Kombat Pack for Mortal Kombat 11. Get your popcorn and controllers ready because this is HUGE!

Above we have the trailer for the full roster reveal, starting off we see Shang Tsung followed by the already announced Nightwolf. Then things get shaken up a bit after that, as we see Arnold Schwarzenegger as Terminator T-800 from the upcoming newly announced movie, Terminator: Dark Fate.

The video continues and we hear a hysterical laugh, of course this the Joker. Even though these characters were previously rumored it's still great to see them officially confirmed for fans to enjoy. Other DLC fighters that were included in this reveal were: Sindel and Spawn. When will players be able to get their hands-on these iconic characters? Shang Tsung and Nightwolf are already live, Terminator will arrive in October, Sindel this November, and Joker and finally Spawn will come in early 2020. Mortal Kombat 11 is currently available on the Xbox One, PS4, PC and Nintendo Switch. 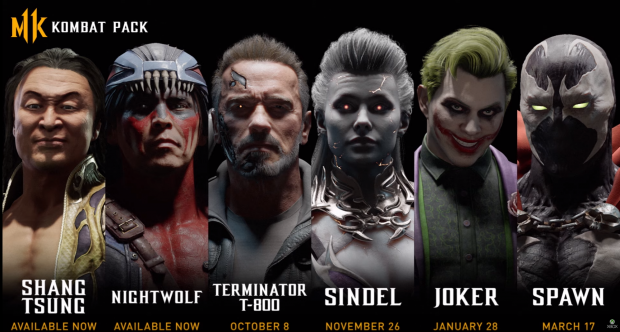