The largest individual solar power project in the world has just been turned on, with the United Arab Emirates as its home with the Emirate Water and Electricity Company starting up Noor Abu Dhabi.

Noor Abu Dhabi is capable of 1.18 gigawatts of peak capacity, and when compared to Solar Star in the US that cranks out 569MW, the new UAE-based solar farm is truly a beast. Abu Dubai is talking up the environmental side of its new facility, with its 3.2 million solar panels providing enough power for 90,000 people. It will also lower CO2 emissions by 1 million metric tons, which is the same as removing 200,000 cars from the roads, according to the Emirate.

Mohammad Hassan Al Suwaidi, Chairman of EWEC said: "The completion of the project marks a significant milestone in the UAE's Energy Strategy 2050, launched in 2017, to increase the contribution of clean energy in the total energy mix to 50 per cent by 2050 while reducing the carbon footprint of power generation by 70 per cent. This is in line with the sector's transformation strategy by providing alternative sources of energy that can help us improve the sustainability of the water and electricity sector." 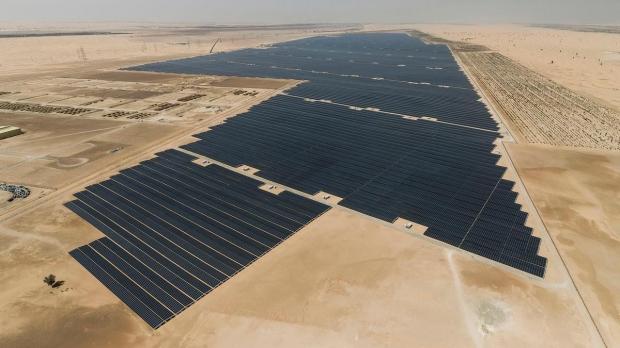