Fortnite is making a forking lot of cash (who else loves The Good Place) for Epic Games, and especially so on iOS where according to Sensor Tower's new data that has the game pulling in over $500 million in revenue in just 326 days. 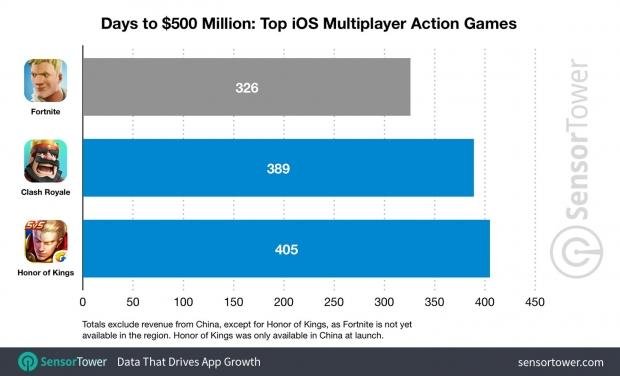 This beats the previous records of Clash Royale which took 389 days and Honor of Kings that took 405 days to reach $500 million in revenue. Apple is making a huge chunk of this, with the company taking a large 30% of the cut while Epic Games bypassed the Play Store and pulled in all of the profit on its own that when combined with the iOS revenue sees Epic with around $450 million.

US gamers accounted for 64% of the spending on iPhone and other iOS-based devices with $320 million total. Now that Apex Legends is here, Fortnite might see some competition in iOS revenue, so it'll be interesting to see how many days Apex Legends takes to reach $500 million and with its massive hype whether it'll be less than 300 days or not to break the record here with Fortnite.