GameStop's board of directors no longer plans to sell the company to a third-party, the games retailer today announced.

The future of GameStop remains uncertain. Sales were down slightly by 5% during the holiday season and the company is actively searching for ways to offset its $800 million debt and losses. Pressure is mounting as digital gaming puts a dent in resale and trade-ins, which is a trend that pleases publishers. Without a CEO, the retailer is essentially operating the current industry landscape without a head. GameStop's board bought some time by selling its Spring Mobile business for over $70 million, but there's no other pieces to sell, only the whole pie.

Now GameStop's board announced it won't be selling the company because favorable terms couldn't be reached. The news caused company shares to plummet by over 27% to $11.28 per share, the lowest it's been since 2005.

"In June 2018, GameStop's Board, together with outside financial and legal advisors, commenced a review of a wide range of alternatives to enhance shareholder value," the company wrote on its investor relations page.

"The Board undertook a comprehensive review process, including discussions with third parties regarding a potential sale of the company. GameStop's Board has now terminated efforts to pursue a sale of the company due to the lack of available financing on terms that would be commercially acceptable to a prospective acquiror." 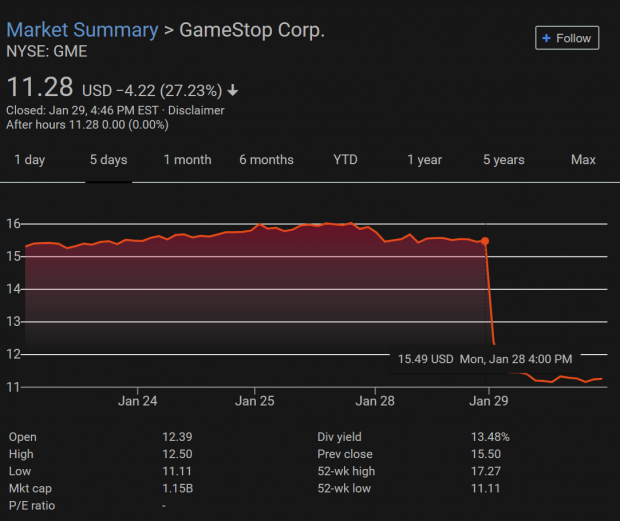