The release for JUMP FORCE is about a month away and Bandai Namco are gearing up for the launch by revealing the dates for the open beta weekends that are about to be upon us.

Bandai Namco have revealed the beginning date for the JUMP FORCE open beta weekend, players will be able to literally 'jump' into Bandai's upcoming game on January 18th. The open beta will give players the opportunity to play the games online versus mode across the span of 17 different characters. Players will be able to battle across five stages and also test out the online lobby using six preset avatars.

The open beta will last for three hours each day and will begin on Friday, January 18th at 4:00am and will finish on Sunday, January 20th at 3:00pm. PS4 and Xbox One owners will be able to pre-load the beta on January 17th so its ready to play when the weekend starts. If you are interested in more news about JUMP FORCE, check out the character reveals for; Kenshin and Shishio, SSGSS Vegeta/Goku & Golden Frieza and the $260 JUMP FORCE: Premium Edition. JUMP FORCE will be officially launched on the 15th of February. 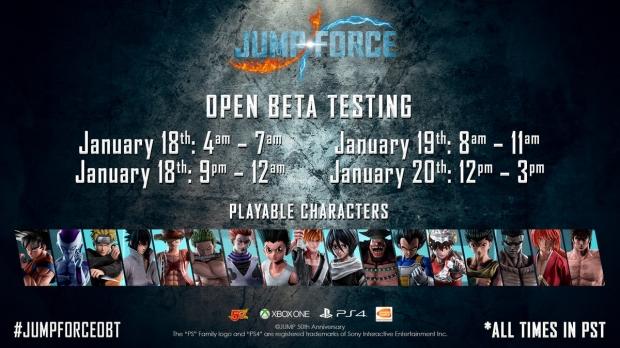