On the heels of its recent Timesplitters acquisition, THQ Nordic confirms a rather robust lineup of in-development games. 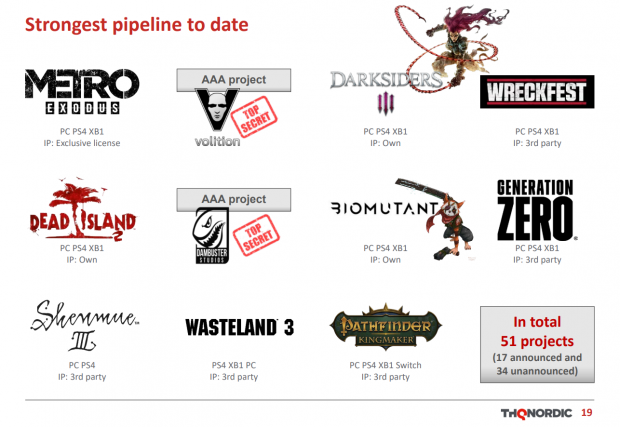 THQ Nordic currently has 51 projects in the works, the company announced in today's Q2 financial results. This fifty-strong slate is the company's "strongest pipeline to date," the filings say, the majority of which are unannounced games. The publisher says 34 of its 51 games are unannounced titles.

However all of the projects may not be top-tier games from key franchises, and instead may include partner titles, third-party-owned games, and licensed projects. Renown studios like Saints Row dev Volition Entertainment and Dambuster Studios are both developing "top secret" AAA titles, the report says, and the company recently issued new shares in a bid to raise funds for game development, acquisitions, and operations.

In a statement to investors, THQ Nordic CEO Lars Wingefors expressed confidence in the company's pipeline of announced and in-the-works games.

"I expect our well invested pipeline of future products, of all sizes, to generate increased revenues and improved profitability over the coming years," he said.