Intel is preparing its strange refresh/emergency release of their 9000 series based on the Coffee Lake-S architecture, with a new mid-range Core i5-9600K planned and coming soon. 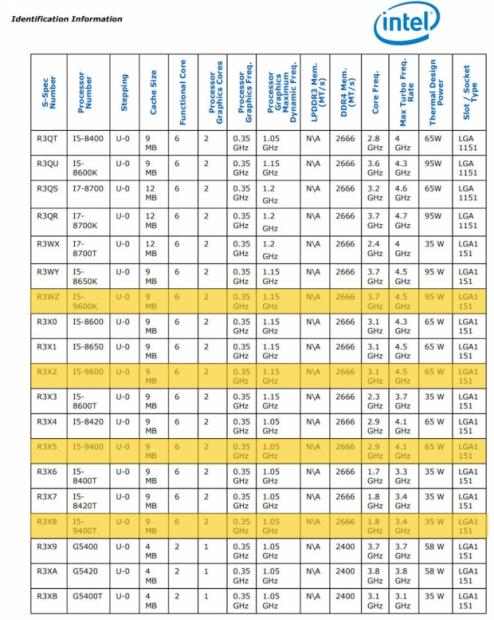 The new Core i5-9600K is a 6C/6T processor with no Hyper-Threading and a slight CPU clock speed bump to usher in the new CPU. Intel will be offering up 100MHz in base clock and 200MHz in Turbo clocks over the Core i5-8600K, all staying within the same 95W TDP. The new SKUs were found in the Microcode Update and June 2018 8th Gen Core Family update, which means they're close, but not here just yet.

Intel's big selling point with the 9000 series CPUs will be the official introduction of the first 8-core CPU parts from Intel in the form of the upcoming Core i9-9900K which is an 8C/16T beast that will take on the AMD Ryzen 7 2700X processor. It's going to be a confusing release, compounded by the fact there'll be a "new" Z390 chipset launched at the same time.

In effect, Intel is bumping CPU clocks up by around 100-200MHz and slapping a 9 where the 8 should be. Yay.