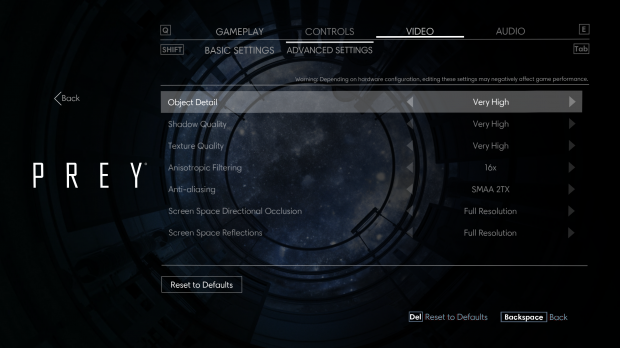 Arkane appears to be making good on its promise that Prey will be "really flawless when it ships." According to PC Gamer, Prey has consistently smooth frame rates on specific AMD and NVIDIA cards. Prey is able to hit 1440p 100FPS with an NVIDIA GeForce GTX 1070 on a G-Sync enabled monitor at Very High settings, and the game never dropped below 90FPS.

One of the major differences between Prey and Dishonored 2 is that Arkane's new game runs on CryEngine, not their proprietary VOID engine. What's more is that Prey is a very enclosed type of game, whereas Dishonored 2 is more open-ended and has a lot more assets and textures to render and load.

But from PC Gamer's quick impressions, we can clearly see the game runs quite well on PC--at least on rigs with a GeForce GTX 1070 and an AMD R9 Fury X which are both higher-end cards.

It'll be interesting to see how the game fares on lower-end builds that're closer to the game's minimum requirements--a GTX 660 or AMD Radeon 7850--and even the recommended GTX 970 and AMD R9 290 cards.

TweakTown received a PS4 code instead of a PC code, so our review will be on console instead of PC this time around. Be sure to look out for our first impressions article which should be up in a day or two, and our feature-length review that will be up shortly after.