Kojima Productions has dropped its second Death Stranding trailer, giving us a ton more questions than answers. The footage is a monument to the weird, a shrine to the bizarre, but it also has quite a few clues and possible symbolic references, especially if you've been following our coverage of the game. So without further adieu, let's jump right in those inky depths, shall we?

They say that the transition is instantaneous, but it's not: there's a 30 second+ disparity between the moments in these trailers. I'm not saying the theory is wrong, but the whole thing about the child being instantly transported is.

The trailer opens up to a dishevelled, grey and war-torn world. It's a world that may be our own, or some twin-world on some forked timeline, a weird dimension that's close to ours, but still so far away.

The mud is riddled with crabs with snaking black umbilicals just like the first trailer. It appears horrible undead soldiers have been resurrected by black ink--the same stuff that's pumped in the umbilicals?--and they patrol the ruined streets, with corrupted planes flying overhead.

We see a man--Guillermo Del Toro--huddling through the mud. He's holding a tank filled with an inert fetus--possibly a child that's pure and not corrupt. 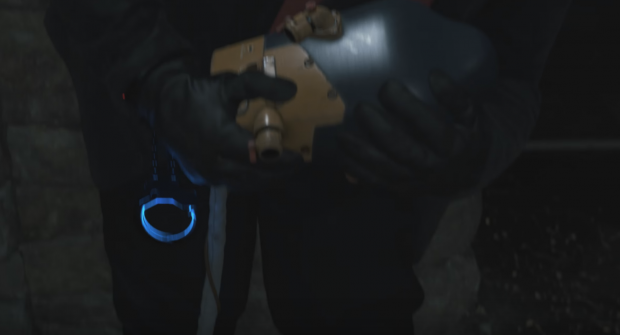 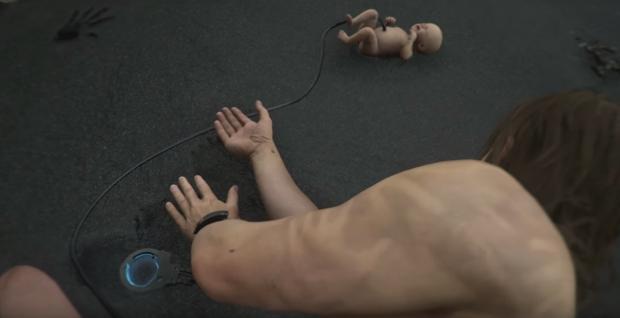 Zooming in on the pin on his jacket, we see that Del Toro's name is Bridges, or maybe that's the name of the project he's working on? Project Bridges? As in bridges to other worlds? We see that "Bridges" is part of the United Cities of America, further hinting this is an alternate timeline.

A web of cities that haven't been destroyed? pic.twitter.com/36tp0JvYaC

Also, in this world, rainbows are upside down.

"Bridges" has is also handcuffed like Norman Reedus in the first trailer, but his cuff is on the opposite hand. This could be a big clue. 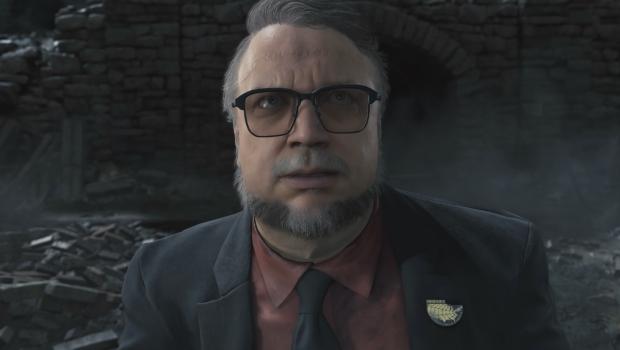 "Bridges" also has some pretty gritty stitch-scars on his forehead, making him look quite like Frakenstein's monster. Could this mean Bridges was lobotomized at some point? 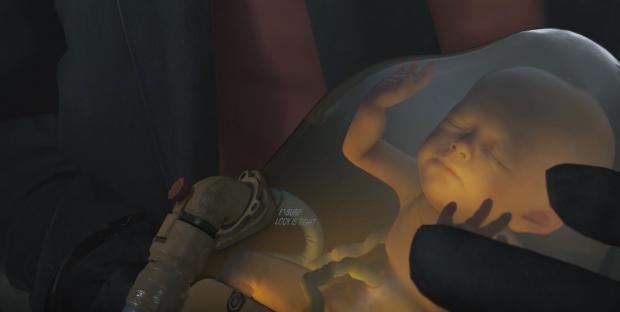 "Bridges" is actually hooked up to the tank via a synthetic umbilical cord, giving us another direct look at the "ropes" that bind players in the game, first shown off in the original trailer where Norman was tethered to a baby with a black-ink umbilicus.

As a tide of black ink swells in, "Bridges" proceeds to "turn on" and "activate" the fetus in the tank, and it springs to life. Note that the other end of the cord is hooked through his pants, indicating "Bridges" is actually directly tied to the child.

If you're unfamiliar with Kojima's philosophy on "ropes" and "tethers" and how they'll affect Death Stranding's gameplay, here's a reference point:

"A strand in psychology is often used to refer to ties or chains. So how all the crabs [in the trailer] have this weird umbilical chord and how the baby is tied to Norman [Reedus' character] is a representation of this. There's a Japanese author I am a huge fan of called Kobo Abe.

Once the baby is activated, a broken plastic doll floats by. This doll baby is "corrupt" and "dark," riding the black tide of whatever the ink is--perhaps a contagion, or some sort of alien virus like the black oil from The X-Files? 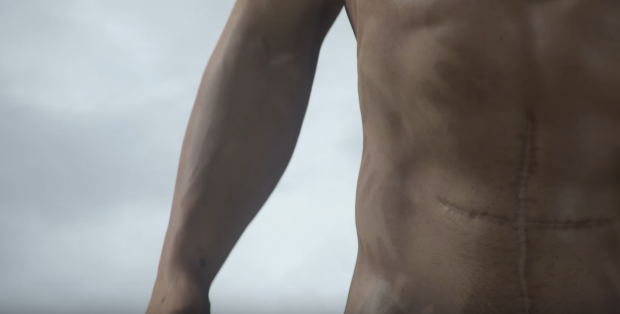 Note that the plastic doll has the same cross-shaped wound as Norman Reedus in the first trailer. This could be symbolic, possibly showing Norman slipping to the "dark side" and being "corrupted" by the ink.

The plastic doll is actually being pulled by a cord that's not unlike an electrical cord, possibly illustrating the "corrupt" version of Kojima's ropes.

Once the doll passes, the"Bridges" faces the camera and acts is if he's concentrating, or perhaps afraid. Maybe he is concentrating part of his life essence or will through the umbilical and into the child, thus waking it up. 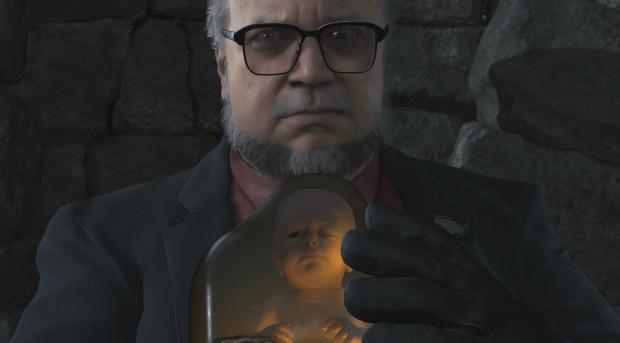 And wake up it does: the child opens its right eye, not its left. This is extremely important, and folds into the "illuminated eye" symbolism, which is a massive clue to the natural symbiosis that might be present in Death Stranding.

"Each of us is really two people," Dan Eden writes in an informative post on his blog View Zone. "We are literally two thinking beings residing in the same body."

Does this mean players are linked not only physically and symbiotically via umbilicus, but also with their minds? Did "Bridges" pass on part of his consciousness to the baby, thus activating it and bringing it to life?

Based on what I've seen so far, I think "Bridges" (Guillermo Del Toro) is actually Norman Reedus' father. I think Norman was birthed in that tank right there, possibly as the "last pure human" before the world became completely overrun by the ink.

As for the first trailer, well...it could be symbolism. What if Norman was holding himself as a child? And then it vanished into oil, symbolizing the child became "corrupt," thus leaving those black fingerprints on his body?

Or, as Kotaku and other fans speculate, the baby could've been warped from Norman's timeline via a "bridge" over to Del Toro's timeline...but I still that's too convenient.

The best part of the trailer was Mads Mikkelsen's reveal.

The plastic doll is pulled down the black inky waters by a weird tentacle, where undead soldiers saunter forward.

Mads Mikkelsen reveals himself in all of his runny mascara glory.

Mikkelsen looks as if he's the corruption made flesh: the black ink is soaked into his face, his eyes, his hair; he exudes this feeling of malice. Those sparking tentacles snake around him as if he's some sort of bizarre otherworldly being, then slide back into him. 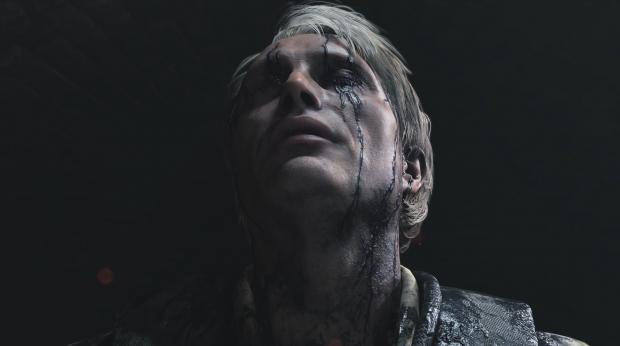 This could be the "dark" or "corrupt" version of the umbilicus (aka "ropes) that bind people. They could be brought on by the weird ink, or perhaps the ink is just figurative? Perhaps the ink itself is death?

Remember that plastic doll? Well, it actually floats down to Mikkelsen and bumps into his leg. 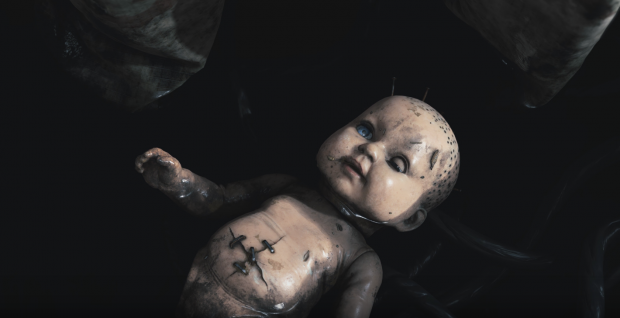 As soon as it makes contact with him, the doll opens its right eye, keeping its left eye closed. Is it opening the conduit, the same as Del Toro did with the child in the tank?

The doll's eye is blue, just like Norman Reedus'. 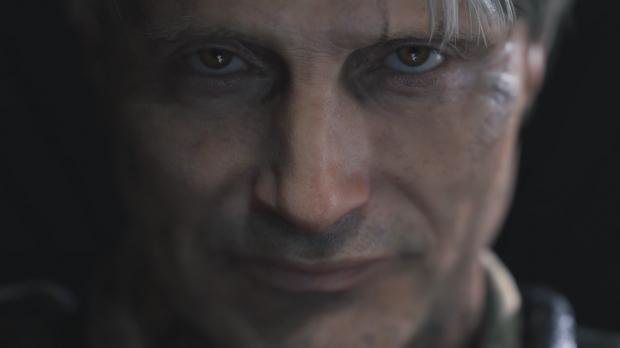 After this sequence, Mikkelsen appears to be a normal man, just like Reedus in the original trailer. There's no touch of the black ichor--just a very terrifying-looking Mads.

To me, this indicates that the doll somehow absorbed the infection, with a connection forming through its right eye: the eye could act as a conduit for the "other self," thus passing the ichor through to the other side.

I think this sequence was purely symbolism, however: I think the doll represents Norman, and Mikkelsen wants him so he can pass the infection along to Reedus and become "pure" again.

What do you think? Does any of this make sense now, or are you more confused than ever? Let us know in the comments section!