Ubisoft will release an unannounced AAA IP in 2017, according to the company's Fiscal Year 2017 forecast. 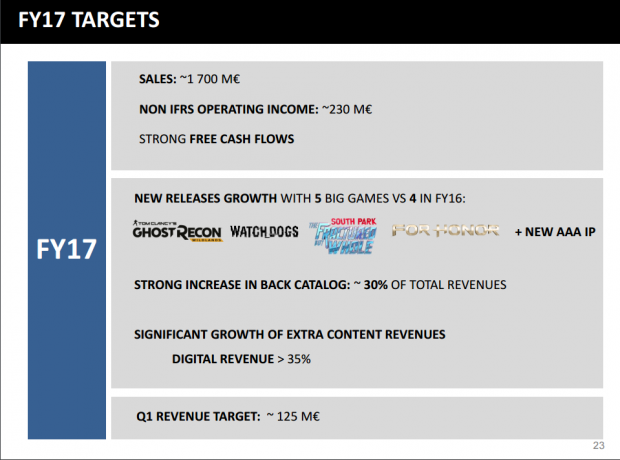 Leading games industry titan Ubisoft will expand its franchise lineup with a brand new AAA IP in 2017, complimenting its Fiscal Year 2017 lineup that includes Watch Dogs 2, South Park: Fractured but Whole, Ghost Recon: Wildlands, and For Honor. Ubisoft's FY 2017 ends on April 2017, so all of these games--including the new AAA IP--will be out before then.

Details on the unannounced IP are light, but expect it to be a completely new franchise that's not tethered to any existing series--it won't be an Assassin's Creed game. Ubisoft has yet to publish the transcripts for its FY 2017 earnings call, but we'll be sure to comb the recording to find out any snippets. We could see an unveiling at E3 2016, too.