In the games industry, it's only natural that any high-profile online game is accompanied by a rocky launch. In The Division's case, though, dastardly gamers have already found a way to grief other players by simply standing in their way.

In The Division, players can stand in the way of doorways and block them off from other players. Ubisoft made the decision to make all in-game avatars solid rather than allowing players to pass through one another, which is standard for any huge MMO-style online game. This oversight has caused a substantial amount of grief in the community, and armed trolls with an effective way to frustrate just about every would-be Division agent in New York.

Sadly, griefers can inhibit progress right at the game's start. Right after the opening cutscene, players start off in a safehouse that has only one exit. By simply standing in the way, griefers are pretty much denying access to the rest of the game, taunting other players by dancing and waving in place.

There is a work-around, but it's somewhat time-consuming. You can't exactly push other players out of the way, but if you run against the blocked area, you'll eventually be teleported through the other side, freeing you from the rather annoying grief. To get past you must be running--not walking or jumping--so just keep working at it and you should get past.

Hopefully, Ubisoft will address this annoying oversight with a new patch, but I'm surprised that this wasn't fixed before launch. Reducing player collision is pretty much par for the course when it comes to huge online games. 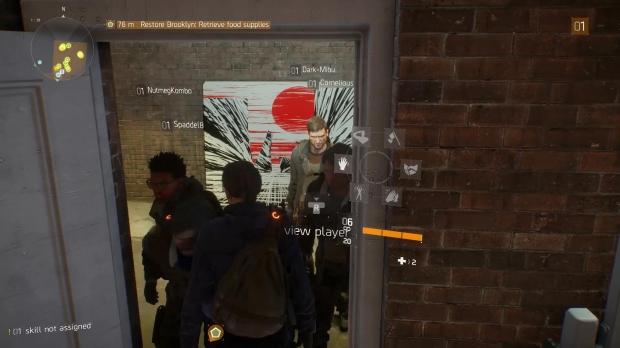