AMD has been in the headlines quite a bit this year, and we're only a month into 2016. According to the latest information, AMD is working on a new EHP (or Exascale Heterogeneous Processor) that has been confirmed by an AMD engineer, who has also confirmed the name of the processor, too: Zeppelin. 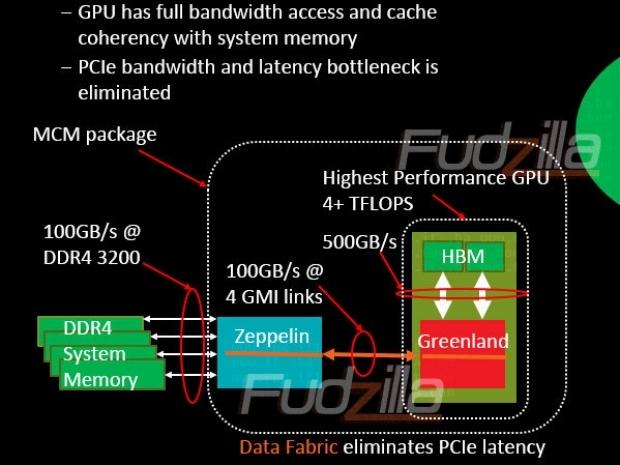 Zeppelin is a new Multi Chip Module, that features 32 Zen cores tied into AMD's impressive Coherent Fabric - which offers 100GB/sec of bandwidth - compared to PCIe that offers around 15GB/sec. The latency has also been reduced from 500ns to something much smaller, but the bigger question is whether Zeppelin refers to the Zen processor cluster or the MCM as a whole.

Digging into Zeppelin, we find the Vega 10-based MCM. Vega 10 will sport up to 4 GMIs (Global Memory Interconnects), which allow the CPU to talk to the GPU at 100GB/sec, courtesy of the Coherent Fabric. The MCM is also capable of communicating with the RAM at 100GB/sec too, which allows for a super-fast system with magnitudes more bandwidth than we have right now.

What we do know, is that the Zeppelin-based EHP variant will feature next-gen Vega 10 graphics, but we don't know how powerful it will be. We should expect AMD to push more details out on Zeppelin, Vega 10 and more as the months fly past.