A new bit of artwork is rumored to be associated with Platinum Games' upcoming Teenage Mutant Ninja Turtles game...and it looks tubular. 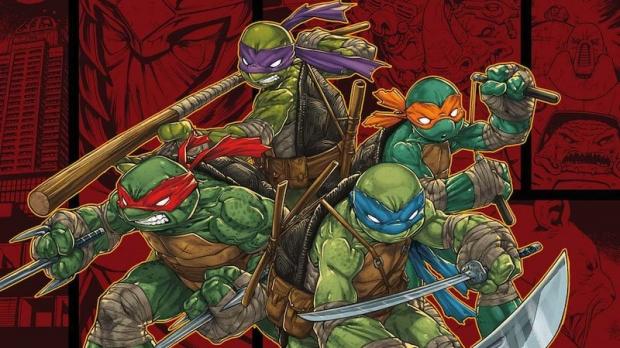 The word is that Platinum Games, the Japanese devs who brought us such gaming greats as Bayonetta, Okami, and Viewtiful Joe, are apparently planning on spinning their magic on the Teenage Mutant Ninja Turtles series. According to an Australian classification listing, the game will be called TMNT: Mutants in Manhattan, and Activision will step in as publisher.

Up until now we haven't received any actual confirmations that the project exists, however a new bit of artwork may indeed be attached to the game. If genuine, the Mutants in Manhattan promo art shows authentic IDW-flavored artwork that harks back to the early days of the triumphant comic series.

So this points to a Teenage Mutant Ninja Turtles game with Platinum Games at the helm, with IDW canon holding it all together. What more could you ask for in a TMNT game?

Be aware that the artwork could be a fake, or just the cover art for a spin-off comic series based on the game. Rather than an IDW collaboration, Mutants in Manhattan may indeed coincide with the new Teenage Mutant Ninja Turtles 2 reboot sequel. In the past, Activision and Platinum Games teamed up to make Transformers: Devastation, so we may see another hack-and-slash tie-in.

Based on what little clues we have on Mutants in Manhattan, we do know that the game will be semi-violent as denoted by the M rating. Of course, the Aussie M rating is for 15+ instead of the ESRB's 18+ M for Mature, so that's something.

The listing also reveals that Mutants in Manhattan will have online interactions, hinting at online play. Maybe the game will be a beat-em-up in the vein of the arcade classic? Destructoid notes that the game is listed for a broad spectrum of platforms including PC, PS4, Xbox One, PS3 and Xbox 360. However, the ratings board only lists "multi-platform" and doesn't go into specifics.