Someone has created a working lightsaber using laser-light as it's basis. Well, it's not quite a light-saber, but just a really bright and powerful 7W blue-diode laser that doesn't really resemble a lightsaber at all. But he's calling it one, so there's that I suppose.

In reality the individual in the video, styropyro, actually built his own laser using a rather 7W Nichia made GaN diode that runs at a maximum of 4.6A. His design uses a wavelength that just happens to be highly visible to the human eye. This laser definitely can cut, though slowly, through a variety of materials. Just don't expect it to be able to lop off limbs.

The great thing is that all of the parts used to make this pseudo-saber are actually publicly available in most regions. You can theoretically make a very powerful laser all on your own, well beyond the 7W power-envelope of the one in the video. But just be very safe if you do, and always wear eye-protection when playing with lasers.

For his next trick he plans on making a "bazooka" type laser weapon with multiple lasers that'll amount to a total of 150W of power. But in the meantime you can watch him carve wood and burn through a variety of substances. It's all rather neat, even if it isn't a proper lightsaber. 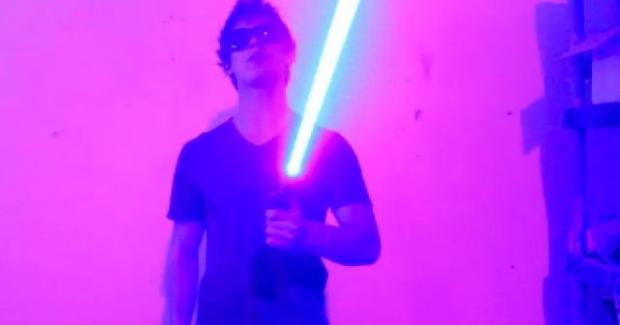