While you can buy in-game insurance for your base in Metal Gear Solid V: The Phantom Pain, Crystal Dynamics doesn't want to be alone in the microtransaction game, announcing a bunch of digital gear for its upcoming Xbox One timed exclusive, Rise of the Tomb Raider. 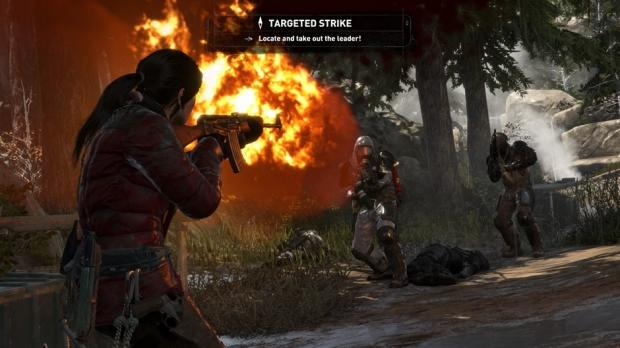 Rise of the Tomb Raider will feature 'Expedition Cards' that allow players to "craft missions and challenge your friends to reach the top of the leaderboards" according to Crystal Dynamics' Creative Director, Noah Hughes. Hughes continued: "In Rise of the Tomb Raider, you'll earn credits by completing challenges and exploring the world. These credits can be used to purchase Expedition Card packs. When used, Expedition Cards become modifiers in game modes outside of the single player campaign. Some Cards are humorous, such as Big Head Mode, while others can increase the challenge or give you special advantages".

"There are two types of Expedition Cards: Foil and Common. A Foil Card will give Lara the strongest or strangest variations and can be used as many times as you wish. A Common Card is only used once, and you'll need to earn more credits to buy it back", Hughes continued. He added: "Expedition Cards offer "hundreds" of ways to customize Rise of the Tomb Raider, Hughes said. "You can also set up challenges for your friends to see if they can beat your scores with the same card setup. We'll have about 300 cards available at launch, and more will be added in the weeks that follow".

Rise of the Tomb Raider will feature a $30 DLC pack that will include the following:

On top of that, we'll be greeted with the ability to "extend the single-player campaign" with some new modes courtesy of Crystal Dynamics. These modes include: