GDC 2015 - Valve has been showing off its VR headset to various members of the press and industry, but ex Epic Games God and now boss of Boss Key Productions, Cliffy "CliffyB" Bleszinski, has used it and taken to Twitter with his impressions. 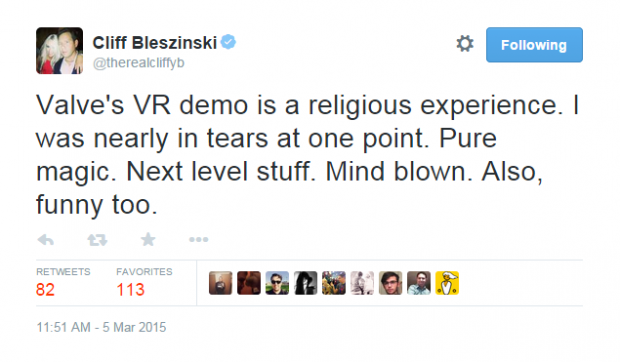 CliffyB had nothing but good things to say, where he tweeted: "Valve's VR demo is a religious experiecne. I was nearly in tears at one point. Pure magic. Next level stuff. Mind blown. Also, funny too". I don't think there's anything else to know at this point - but VR is going to really change things. For it to be referred to as a "religious experience" and that it's "pure magic" and "next level stuff" and that he had his "mind blown" we are beginning to turn the dial up on our excitement meter.