Intel is expected to launch its new Devil Canyon-based CPUs at Computex on June 2, but it looks like this will just be a show-and-tell, and not a full release. Retail availability on the Devil Canyon chips will reportedly now be late September. 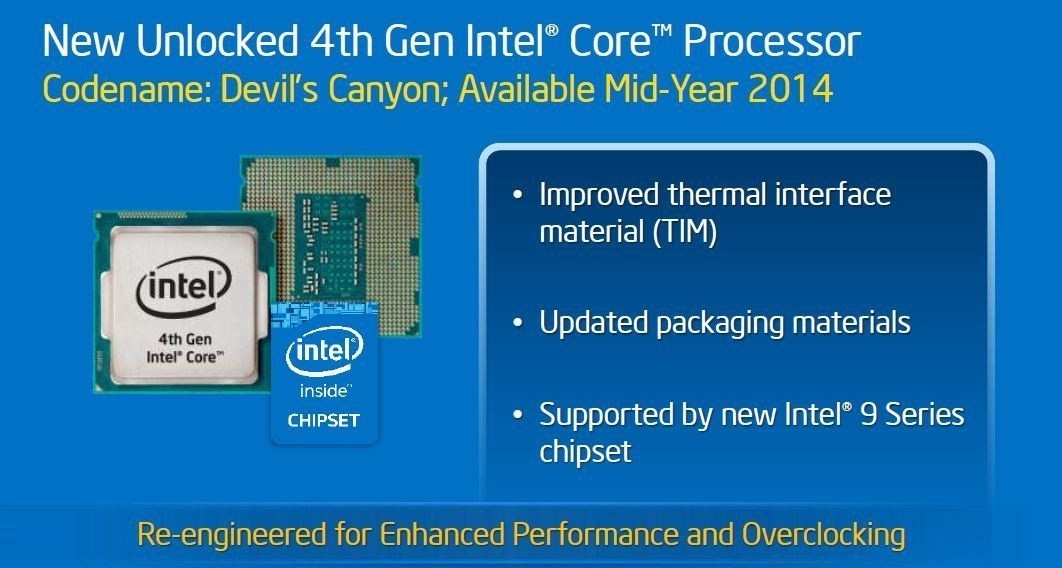 The new Devil Canyon CPUs were expected to bring forward faster clock speeds, better packaging materials, design that is better for overclocking, and better TIM between the IHS and die of the processor which would result in higher overclocks. The Core i7-4790K was meant to be the star of the show, but along with the Core i5-4690K and Pentium G3258 CPUs, retail launches won't happen until later in the year.

This is why we haven't seen the high-end enthusiast boards on the Z97 chipset unveiled yet, as motherboard makers are waiting for Intel to launch its Devil Cayon CPUs - but with this delay, we might not see much of these motherboards unveiled. But, at Computex, we should see the new LGA 2011-3 motherboards, which will feature the enthusiast X99 chipset - something we look forward to seeing ourselves.

When it comes to Broadwell, Intel has reportedly pushed the launch of its next-generation processors until Q2 2015. We've already seen the CEO of Intel promise these CPUs before the holidays, but this will most likelye arrive in the form of the mobile processors, and not the desktop-based chips. We will have all of your Intel CPU requirements met at Computex in just a couple of weeks time.