For more than 100 years now, astronomers have gazed into space and attempted to figure out what fuels the massive hurricane-like storm that orbits just below Jupiter's equator. During the 1800's the storm was estimated to measure more than 25,000 miles across, and recent images from the Hubble Space Telescope show that it is just a mere 10,250 miles across today. To put that into perspective, back in 1890, three Earth's could fit inside the storm, and today only one would could squeeze in. 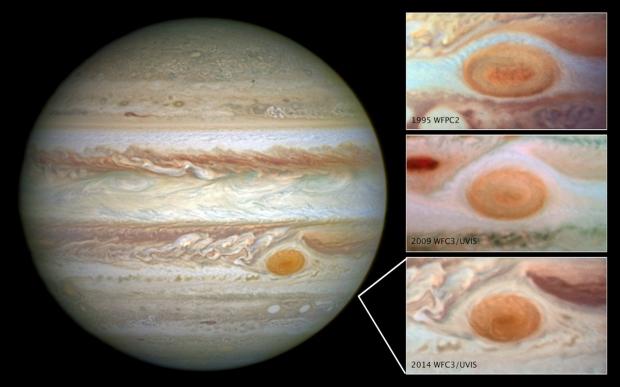 At the moment, scientist have no conclusive theory on why the storm is shrinking, it has been able to figure out that the storm is shrinking faster as they years go by, and that it is currently losing about 580 miles in diameter per year. One early theory suggest that Jupiter's atmosphere is losing some of its volatility and bleeding off energy, which in turn is causing the storm to slowly die down. The video below from Videos From Space shows just how fast this shrinkage is taking place.

"In our new observations, it is apparent that very small eddies are feeding into the storm," Amy Simon, associate director for strategic science at NASA's Goddard Space Flight Center, said in a statement. "We hypothesized that these may be responsible for the accelerated change, by altering the internal dynamics and energy of the Great Red Spot."