For the last month or so, Twitter has been testing out a new profile page with select users, and today the company has released its new profile design to all of its users. The complete overhaul has taken Twitter from what many considered to be an outdated design, to a more modern look and feel that is on par with Facebook and Google Plus. 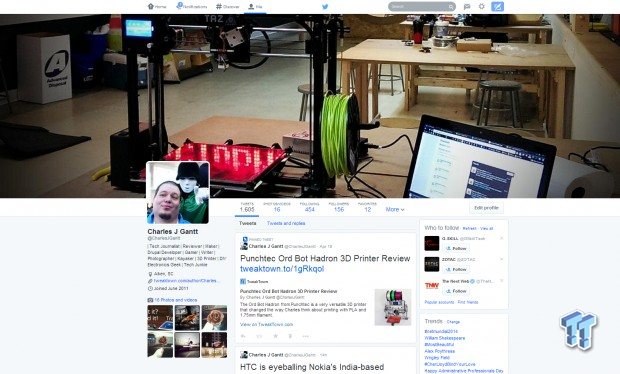 The biggest thing you will notice is that the new Twitter profile now spans the full width of the page, and looks a lot like Facebook's Timeline. Users can now upload a large header image similar in size to what Google+ allows. Users also now benefit from a mosaic-view of their twitter post, but a chronological view is also available. Additionally, users can pin a single Tweet to the top of their feed, which allows them to keep important tweets at the top.

The way Twitter displays Tweets in the mosaic view is based on how much engagement each tweets gets. Tweets that get Favorited or re-tweeted more will move up the list, while less popular tweets get pushed down. Users can also filter tweets from others profiles and select just tweets with images or videos. As you can see above, I have the new profile and honestly it feels like this is how Twitter should have always been.