Facebook has just launched a new version of its Messenger app for Android and iOS. The newly update app has been completely redesigned from the ground up and appears to have removed many of the stylings it shares with Facebook itself. The new Messenger (note that its not Facebook Messenger anymore) app features a much lighter color pallet and the chat screens are less like the messenger used in the Facebook App. 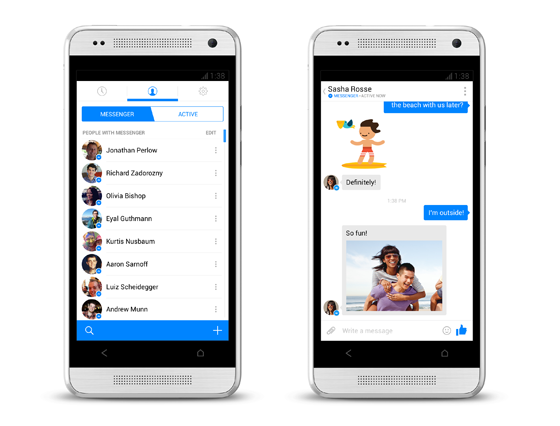 The new styling is intentional and is part of Facebook's master plan to infiltrate the every growing market of instant messaging apps. At the moment, the messaging ecosystem is dominated by WhatsApp and iMessenger, but it appears that Facebook is looking to hit them head on and the newly updated app proves that by adding in a host of new features. One of the most prevalent new features is that the Messenger app now has the capabilities of identifying users based on their phone numbers, something WhatsApp has been doing since the beginning.

Facebook is testing the new version of Messenger with select users on Android and iOS and will be rolling out the new update over the course of the next few weeks. Have you gotten the update yet? If so, post some images and your thoughts on our Facebook page as we would love to see and hear them!