SanDisk recently purchased SMART Storage Systems. With a busy year of acquisitions in the flash market, this certainly ranked among the best. The acquisition caught many by surprise, but in retrospect, we should have seen it coming. The core competencies of both companies mesh nicely. Both companies bring an ingredient for success to the table that the other was missing. 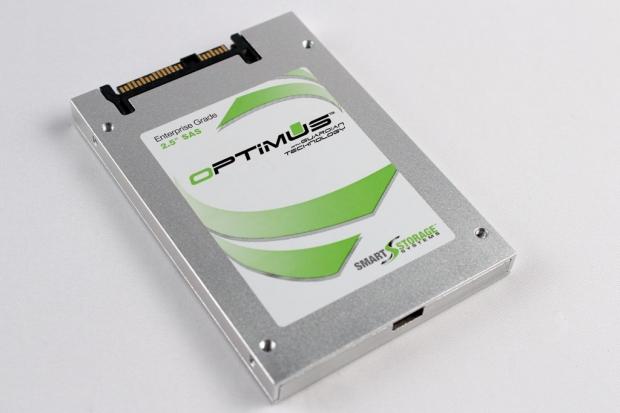 SanDisk brings the fab and a long, illustrious 25-year history in the NAND market, while SMART brings the award-winning Guardian Technology and the forthcoming UltraDIMM technology.

The Optimus is an existing line of SAS SSD's brought over from SMART that is the very epitome of high performance. We have a lot of experience with the Optimus in our labs, with an in-depth product evaluation in our IT/Datacenter library.

We will ruin the fun of reading the entire article by revealing that the Optimus is fast, and not 'just' fast in a normal sense. The Optimus is the fastest SAS SSD that we have ever tested. There simply isn't a faster 6Gb/s SSD on the market, and the addition of endurance-enhancing and data-protection technologies combined to win our Editor's Choice award. The mixture of speed, reliability, endurance and data-protection technologies in SMART's existing product stack surely contributed to SanDisk's decision to purchase the company.

If you needed further proof, there is the recent SPC-1 world record smashed by Kaminario. The Storage Performance Council SPC-1 benchmark replicates typical functions of business critical applications, and only the absolute best storage systems have scaled the heights of this benchmark. With peers such as Huwaei, Fujitsu, IBM, and Hitachi Data systems, the climb to the top surely wasn't easy for Kaminario.

Kaminario is a scale-out all-flash array provider, and they chose the Optimus as the engine behind their next-gen K2 SAN storage solution. The move paid off, with the K2 breaking the SPC-1 record on Oct 17th, 2013 with 1.239 million IOPS and 10Gb/s of data throughput from a 86TB system. As impressive as the record is, the reality of the datacenter also demands a compelling mix of performance and value.

The Kaminario K2 also excelled in this category, achieving one of the best price performance results to date with $0.80 per SPC-1 IOPS. The record-breaking results are not entirely surprising to us here at TweakTown, we have been utilizing the Optimus as an example of a class-leading enterprise SAS SSD for some time.

Kaminario's choice certainly benefits their organization, and we look forward to the great things to come SanDisk in the flash arena. We have a feeling that the world record will be contested very soon, but this time by SanDisk's own UltraDIMM. This game-changing technology is soon to grace the most powerful systems on the planet, and as we bid a fond farewell to the SMART Storage Systems name, we look forward with anticipation to an exciting future from SanDisk.