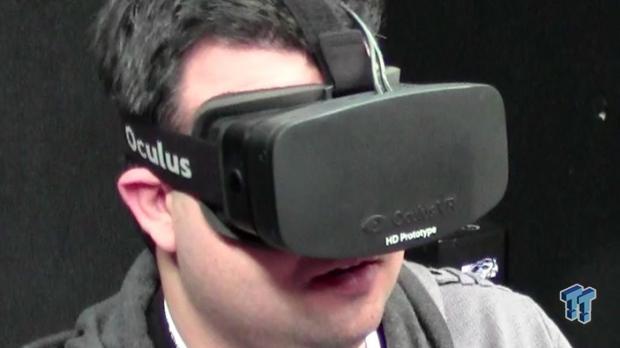 Now, this is where the teenager, Twilight fanboy-like person comes out in me - because when I heard this news I was very excited. Nate walks in and we find out we're going to be using Oculus Rift twice, once with a cinema trailer (Man of Steel) and the second, Unreal Engine 4. So first, I get strapped in with the Man of Steel trailer (above) and it is unbelievable. One person from South Korea created it using the Oculus SDK, which sees you sitting in a virtual theater, watching the Man of Steel trailer.

As the light is beaming off the screen in front of you, it is reflected off of the chairs at your feet. The light reflects off of the emergency exit door, which you can see in the bottom right corner when Oculus Rift is on your head. If you turn around, you'll see the projector light beaming the image onto the screen. It was a truly life-changing experience for me, as it is the one technology that I have taken off and just sat there in wonder thinking 'wow'. You can read as much as you want about it - like I have - but nothing, absolutely nothing prepares you when it is put on your head.

Next, we're shifted to another Rift HD headset where Unreal Engine 4 is being used. This demo was simply unbelievable. The lava flowing past you, the mountain, the snowflakes falling all felt real. It felt like I could put my hand out and catch the falling snowflakes - truly unbelievable. This is all from something that is months away from being a consumer unit.

One of the things I walked away from Oculus' booth at PAX AU thinking was that these guys are just like you and me - passionate. They aren't this huge company that have super amounts of power and unlimited money and are just doing it to make more money - they're doing it because they're all passionate. The amount of passion Joseph had blew me away, and it was great to have an in-depth discussion (as much as I could in a 30-minute time slot) with someone as passionate about tech as me.

I did ask one thing - about Oculus and Valve. I asked if we could see Rift on the Steam Box, with Half-Life 3... Joseph said he couldn't say anything about that, but said he had a big smile on his face about it and we laughed. Could I be right? I've talked about Oculus and the future of gaming... maybe that's where we're headed. You heard it here first, folks!