SD cards have been fast up until now, but Toshiba are really pushing the boundaries of most users expectations with their new Exceria Pro line of SD cards. Toshiba's Exceria Pro SD cards are capable of pushing out write speeds of up to 240MB/sec. 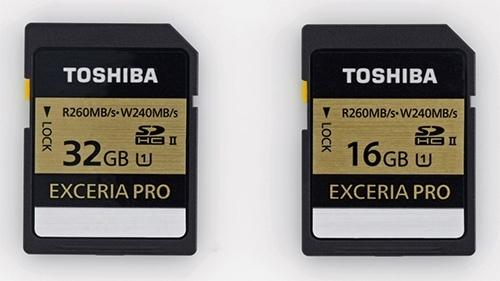 The Exceria Pro has a maximum read speed of 260MB/sec and 240MB/sec writes, with the SD cards arriving in both 16GB and 32GB capacities. The original Exceria series of SD cards from Toshiba contain the same read speeds of 260MB/sec but have a slower write speed of 'just' 120MB/sec. The Exceria series of cards are available in 32GB and 64GB, though.

Toshiba's new SD cards are built for professional photographers, who are in need of some serious read/write speeds for those megapixel hungry cameras.