As typhoon season approaches, Google has expanded its Public Alerts system to include Taiwan and has launched a dedicated crisis map for the country in preparation for the rainy season. These new additions come just in time as weather agencies are currently monitoring a typhoon that can hit the island any day now. 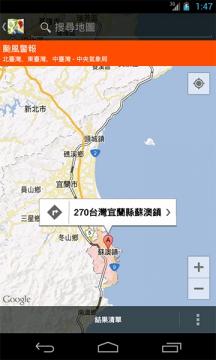 In a blog post this morning, Google said that starting today, the Google Public Alerts page (Source #2) will feature severe weather alerts for typhoons and flood-related events in Taiwan. Additionally, these alerts will also appear on Google Search, Google Maps, and Google Now. For example, if a typhoon alert is issued, the alert will be displayed once you search for relevant information on Google Search and Google Maps. Google Now on Android or iOS will also display a card with information about any typhoon alert if the warning has been issued near your location.

Google has also launched a dedicated Google Crisis Map for Taiwan (Source #3) that provides details in the event of a crisis such as shelter locations, evacuation routes, and much more. Google has teamed up with Taiwan's Central Weather Bureau, Water Resource Agency, Soil and Water Conservation Bureau, Directorate General of Highways, and the National Science and Technology Center for Disaster Reduction to get such a project up and running.