J.J. Abrams already has his finger in a bunch of franchises, Mission Impossible, Star Wars, Star Trek and countless TV shows, but what about gaming? Well, Polygon have the scoop on the director and TV guru reportedly working with Valve, yes - that Valve. 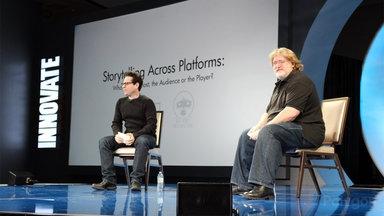 The news comes from the 2013 DICE Summit, where Abrams announced with co-founder of Valve, Gabe Newell, that they two gods of media were in discussions together about making a video game together. Abrams said "there's an idea we have for a game that we'd like to work with Valve on". Newell adds "We're super excited about that and we also want to talk about making movies, either a Portal movie or a Half-Life movie."

At the end of the on-stage talk, Newell said that the DICE lecture was just a public rehash of discussions behind closed doors with Abrams, where he added "what we are actually doing here, we are recapitulating a series of conversations going on."

If you thought this was all just a rumor, and nothing would materialize from this, you'd seem to be wrong as Abrams said "it's as real as anything in Hollywood ever gets. Which is that we are really talking to Valve, we are going to be bringing on a writer, we have a lot of very interesting ideas."

Now, the biggest problem with seeing a Half-Life movie, is that it would make a lot of fans angry to see a traditional game-to-movie scenario play out. Gordon Freeman is never seen in the movie, as the entire game is played from his point of view - so how could Valve and Abrams do this, without pissing off fans? Two words: Oculus' Rift.

Would there be any better application for Oculus' amazing VR headset, Rift? No, no way. Could we see a next-gen game launch (Half-Life 3) along side a movie that would debut at the same time, digitally, through Steam that works with the Oculus Rift VR headset? Imagine watching the movie in a world where you can look around (but not move). It would be the world's first truly 3D movie... just imagine the possibilities Valve have from here with Abrams' help, and their Half-Life franchise.