Facebook has finally updated its aging app to improve its performance. Unfortunately, this update only takes care of iOS users as there has been no announcement regarding Android. However, if you are an iOS user, this update should make you significantly more happy with the Facebook app as it is quite a bit faster. 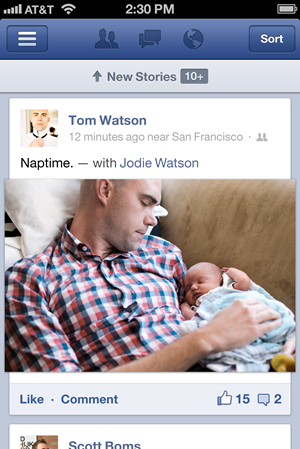 According to the Facebook post, "Facebook 5.0 for iOS is twice as fast as the previous version when launching the app, scrolling through news feed and opening photos in feed." This speed increase is due to the app being completely rewritten from the ground up. A quick update and you'll be able to see for yourself just how much better it is.

The changes are as follows:

App opens quickly: We've rebuilt the app from the ground up, so now the app opens much faster and your news feed and notifications load right when you open Facebook.

Stories scroll smoothly: As you scroll down your news feed, all your friends' stories appear faster than ever. A banner lets you know when new stories come in, and you can tap once to immediately see the latest updates.

Photos load instantly: Tap on any photo and it opens right away. Pull down to close it with a single swipe.

An updated and quicker app is an important thing for Facebook to focus on. They need to keep users' eyes on the app so that it becomes an attractive platform for advertising. If the app is slow, many users will ditch it which could cut into Facebook's bottom line. Now, if we can get them to do the same for Android.