Manli, one of a bunch of companies who are part of the PC Partner group from Hong Kong have shown off some seriously slick looking gear at CeBIT. The hardware in question is Manli's latest mini PC, dubbed Manli Elite. Manli Elite is similar to Zotac's ZBOX systems, but features upgraded hardware, and a different design. 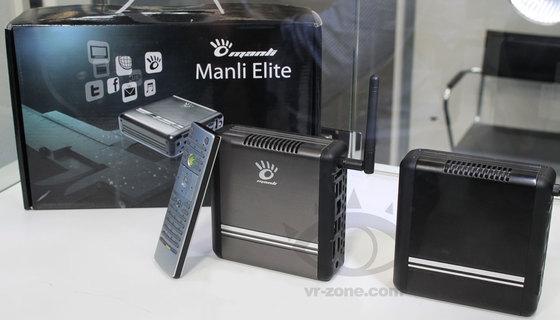 Manli Elite has the same motherboard as Zotac's ZBOX mini AD10, but the Elite sports an upgraded AMD E450 APU, versus the ZBOX's older E350. On top of this, the Elite features two USB 2.0 ports, two USB 3.0 ports, a DisplayPort out, HDMI out, an eSATA port, GbE, a memory card reader, audio jacks, and built-in 802.11 b/g/n/ Wi-Fi.

Inside the Elite itself, is room for an internal 2.5-inch HDD, and a single SO-DIMM slot for memory. The Manli Elite does look very nice, featuring a simple, yet nice design. Manli are also offering an optional media center remote with the Elite and pre-configured models with 2GB of RAM and a 320GB HDD are to be made available in selected markets.