This is not something you'd expect from the can't-do-anything-wrong Apple, but during a flight in Australia, an iPhone spontaneously began smoking and emitting a red glow. Passengers aboard Regional Express flight ZL319 were welcomed to their destination in Sydney, Australia by a somewhat frightening ordeal. 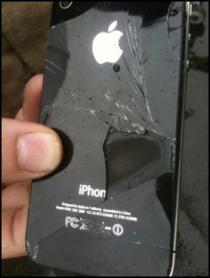 Regional Express said that a passenger's iPhone began "emitting a significant amount of dense smoke" shortly after the flight landed, and the smoke was accompanied by a red glow. The device was extinguished by a flight attendant with no passenger's or crew injured. The phone itself was an iPhone 4, and not the new iPhone 4S model.

It has been taken by the Australian Transport Safety Bureau as part of their investigation. The full press release is quoted below:

Regional Express (Rex) flight ZL319 operating from Lismore to Sydney today had an occurrence after landing, when a passenger's mobile phone started emitting a significant amount of dense smoke accompanied by a red glow.

In accordance with company standard safety procedures, the Flight Attendant carried out recovery actions immediately and the red glow was extinguished successfully.

All passengers and crew on board were unharmed.

The matter has been reported to the Australian Transport Safety Bureau (ATSB) as well as the Civil Aviation Safety Authority (CASA) for investigation and directions.

The mobile phone in question appears to be an Apple iPhone (see picture below) and has been handed over to ATSB for analysis.