A bunch more details have surfaced today on AMD's upcoming "Virgo" PC platform which comprises their next-gen mobile "Trinity" APU using an FM2 package. The latest details confirm that Trinity will in fact be compatible with AMD's current-gen A75 "Hudson-D" chipset, but we are yet to learn whether or not FM1 and FM2 are pin compatible. 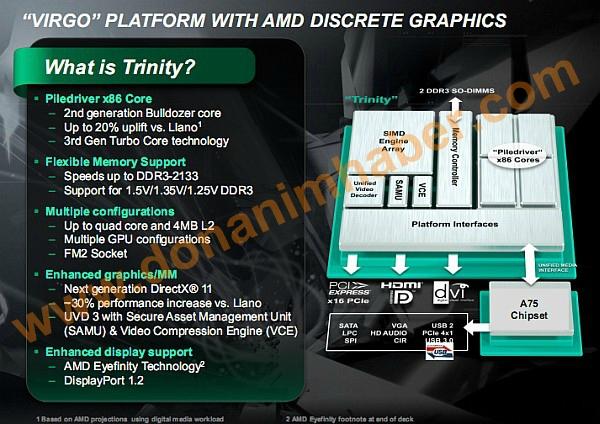 AMD's Trinity mobile APUs are 32nm based and run a TDP of up to 35W. The four x86-64 cores used are based on AMD's next-gen "Piledriver" architecture (rumoured to be between 10 and 15% quicker on average when compared to Bulldozer) and these four cores are arranged in two modules. Each of the two modules holds two cores and is given certain shared and dedicated resources. 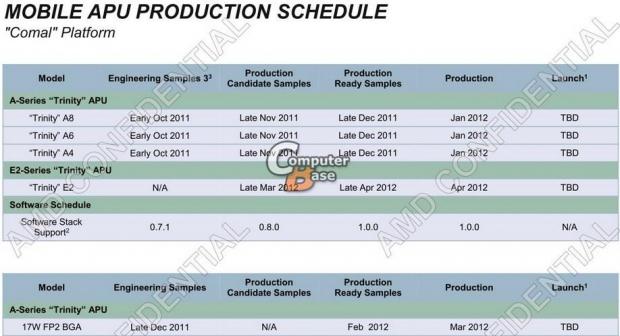 The new APUs sport an integrated DDR3-2133MHz memory controller, up to 4MB (2MB per module) of L2 cache and Radeon HD 7000 series IGP (said to be about 30% quicker than Llano's iGPU). AMD is talking a 20% performance improvement over current-gen Llano APUs which comprise K10 "Stars" cores. A new 3rd generation form of TurboCore technology will also be included that gives superior power management and overclocking features. 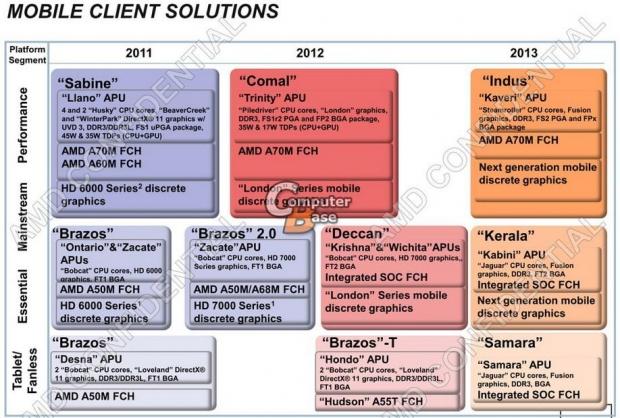 The details provided today also indicate AMD's focus beyond Trinity, with plans to roll in its replacement, "Kaveri" in 2013 which will use "Steamroller" x86 cores quite possibly on a newer 22nm manu process by that stage.

AMD's Trinity APUs are looking to go into volume production as soon as January 2012.