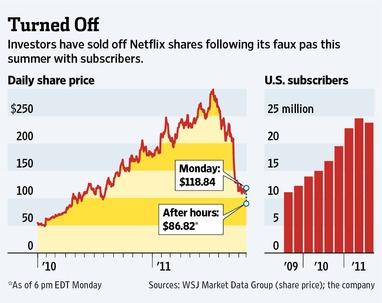 The company did however see quarterly earnings jump 63-percent to $62.5 million, while revenue rose 49-percent to $821.8 million. Netflix have forecasted a fourth-quarter profit of $19 million to $37 million and earnings per share of 36 cents to 70 cents. This is below Wall Street's expectations.

Netflix's current downward spiral is mostly contrived of two moves: in July, Netflix boosted the price of a combined online-video and DVD-rental package by 60-percent, from $10 per month to $16 per month. Then, last month, Netflix announced it would spin off its DVD-by-mail service into a separate business named Qwikster, while keeping Netflix as an online video-only company. Qwikster would involve two different bills and websites, but the plan was scrapped in just three weeks.

Netflix's chief executive, Reed Hastings, admits they moved too fast with the Qwixster idea, but says that the subscriber losses are mainly due to the price increase. He does admit that the price increase was not properly explained, which he says is due to the rising costs of mailing DVDs and acquiring content for the online-video service.

He adds that there will be no promotions to bring back lost subscribers, with "the focus is on bringing back our reputation and brand strength, but it won't happen through grand gestures", says Hastings.