ASUS is about to unleash a new ROG gaming rig in the form of a desktop machine which it calls the Tytan CG8565. It was first seen on radar during Computex earlier in the year, but a date of release wasn't mentioned at the time. A pre-order listing for it has just been spotted in Europe, however, indicating it to be just around the corner now.

Upon first glance the mid tower sized chassis looks to have been inspired by 'ballistic missile submarines', which was of course ASUS' intent with several of its Republic of Gamer series notebooks also running off similar design queues. 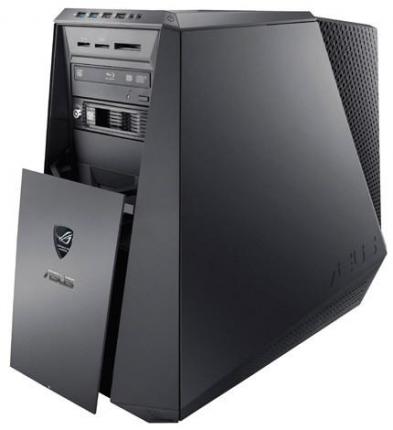 As for the most important aspect, its guts, it runs a 2nd-gen Core i5 or i7 processor on Intel's Z68, up to 32GB RAM, GeForce GTX 560 Ti or GTX 590 graphics card, DVD writer or Blu-ray combo drive and ASUS Xonar audio. It provides four USB 3.0 ports total as well as DVI and HDMI outputs and a 16-in-1 card reader. A single button on the case provides for instant overclocking to really help get those FPS numbers up there.