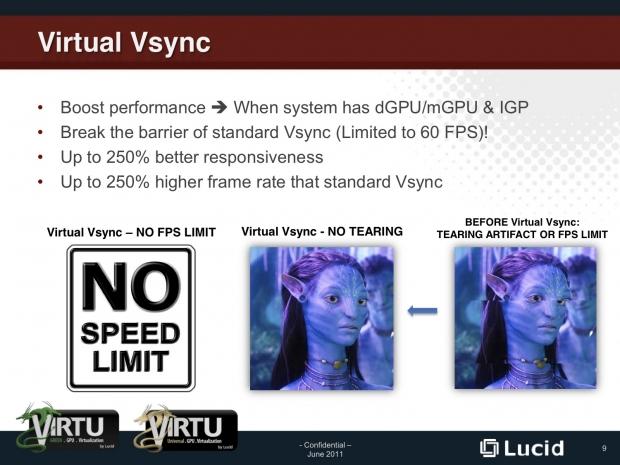 Another benefit is power consumption, the software is able to switch between integrated and discrete graphics options without the need of the user switching cables from port to port when changing tasks.

Virtu Universal features a new Vsync method in which it can include the best image quality without tearing, providing the user with maximum frames per second without jagged or jumpy and fluctuating frame rates. Normally once an FPS limit is hit, with Vsync on, there'll be tearing or a visible issue on the image on your screen; not with Lucid's Virtual Vsync. Lucid are claiming it has up to 250-percent better responsiveness and 250-percent higher frame rate that standard Vsync provides (60fps).

Because of the new super powers of Sandy Bridge and Brazos, the minimum system specs are jumping higher than ever before. Integrated graphics has never been anything to call home about but with the mix of high performance hardware and great software solutions from Lucid, the mix is very, very potent and the future is looking great!