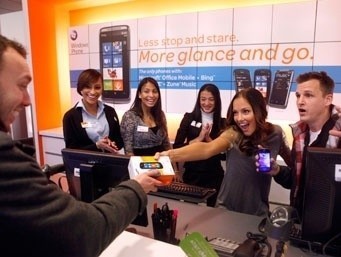 This point is made by showing 55 percent of all phone owners surveyed aged between 18 and 35 have used their phone in a bathroom. To commemorate the US launch of Windows Phone 7, Microsoft is challenging consumers to get a grip on their mobile phone habits.

Below, I have a few details from this survey - interesting results to say the least!

Although consumers love their phones, there is growing annoyance with the distracted behaviors people exhibit while their heads are buried in their phones. Most U.S. adults indicate they have witnessed examples of bad mobile phone behavior, yet relatively few have admitted to engaging in such behavior themselves. Key findings from the study show the following from the surveyed adults:

Seventy-two percent identified bad mobile phone behavior as one of their top 10 pet peeves, but only 18 percent of mobile phone owners admit they are guilty of displaying such behavior.

Nineteen percent of phone owners between the ages of 18 and 24 have dropped their phone in a toilet.

Forty-nine percent of adults between the ages of 18 and 24 have tripped or walked into something while walking and texting or e-mailing on their mobile phone.

Sixty-nine percent of mobile phone users between the ages of 18 and 34 have used their phone while in bed.

I was going to disagree with the dropping their phone in the toilet dot point - but I have a friend who has done this, so it DOES happen.

By reimagining the way people access information on their smartphones, Windows Phone 7 is designed to help people perform common tasks more easily and faster. In an effort to root out bad phone behavior and test the theory that better phone design leads to better phone behavior, TV personality Rob Dyrdek and actor Minka Kelly are currently traveling the country on an adventure to challenge people to change their relationships with the mobile phone. Consumers can follow the Windows Phone 7 Really Rally Road Trip online.

The study was conducted by telephone Oct. 6-17, 2010, by Harris Interactive on behalf of Microsoft. Participants included 2,024 adults over the age of 18. Results were weighted for age, sex, race, education, region, number of adults and number of telephone lines in the household where necessary to align them with their actual proportions in the population. A full methodology is available.
NEWS SOURCE:microsoft.com