The first picture of AMD's reference built Radeon HD 6870 has been leaked ahead of it's launch later this month, it reveals some outputs on the card. 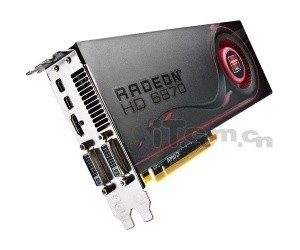 It is the first GPU to no longer hold the ATI name, bearing an AMD Radeon branding in it's place.

The rear of the card includes (the usual 2 slot cooler), 2 X DVI-I connectors, a HDMI port and two mini DisplayPort connectors. Obviously it supports AMD's EyeFinity technology - but over how many screens now that it has 5 outputs is anyone's guess.

From the leaked details, it indicates the Radeon HD 6870 is based on the Barts PRO GPU and will also launch with the Radeon 6850 which features the Barts XT GPU.

Not included in the leak, were details on the next-generation Cayman GPU, it [AMD] are rumoured to launch the 6970 and 6950 GPU's, but there's no specific dates yet.

Another interesting bit was the leaked details have a yet-announced technology called "Eyespeed".
NEWS SOURCE:bit-tech.net