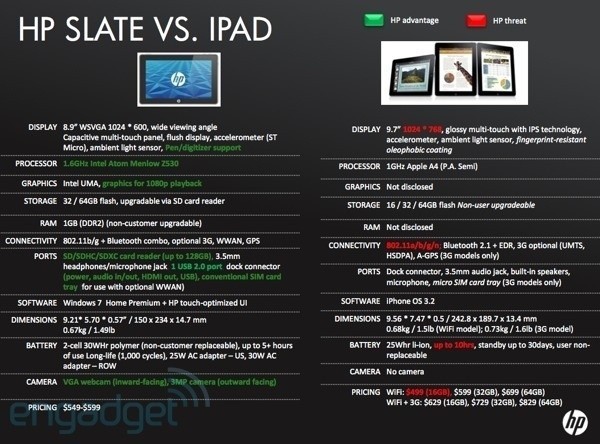 HP's Slate's OS is based around Windows 7, so it will be interesting to see how HP delivers this on a full slate device with limited power under the hood.

On the subject of specs, the presentation slide reveals that the Slate will run a 1.6GHz Atom Z530 processor with UMA graphics and separate 1080p HD video playback (likely to be Broadcom's Crystal HD chip). The capacitive multi-touch display is 8.9-inch with a supporting resolution of 1024x600.

The unit gives 32GB of flash storage and 1GB of non-upgradeable memory. A higher spec'd model coming in at $599 will also be on sale with double the amount of storage at 64GB.

You can learn more about the specs and features at the source.
NEWS SOURCE:engadget.com
Newsletter Subscription