All NewsBusiness, Financial & LegalCases, Cooling & PSUContests & GiveawaysCPU, APU & ChipsetsDealsDisplays & ProjectorsGamingMotherboardsScience, Space & RoboticsStorageVideo CardsVirtual & Augmented Reality
All ReviewsAll ArticlesAudio, Sound & SpeakersCases, Cooling & PSUCPUs, Chipsets & SoCsComputer SystemsDisplays & ProjectorsGamingMotherboardsNetworkingPeripheralsStorageVideo Cards
GuidesGamingAsk the ExpertsNewsletterAboutForums
Halo InfiniteBattlefield 6Elon MuskGTA 6RTX 3080RTX 3070HDMI 2.1Bitcoin Mining
CPUs, Chipsets & SoCs
Ok so right after I posted the screenshot of the early K10 CPUz dump I received an e-mail from a reader saying this is not the first one. Apparently the person that posted that one has done so before.

The CPU in question is a very early engineering sample of the new Magny-Cours CPU. This will indeed features a handy 12 CPU cores on the die but will run at a much more respectable speed than the 800MHz we saw in the other shot.

Still this early in the game it is hard to tell anything other than very basic information. This one shows the CPU running at 3.2GHz and having a 45nm process (as we stated earlier today).

Well it is looking like the middle to end of 2010 will be very interesting. We know Intel will have 32nm six and eight core Clarkdale and AMD is supposed to counter with Magny-Cours which is now looking like it will be a full four cores more than Intel.

This is of course if these shots are real. 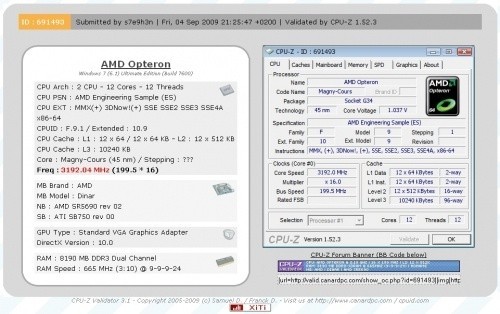