All NewsBusiness, Financial & LegalCases, Cooling & PSUContests & GiveawaysCPU, APU & ChipsetsDealsDisplays & ProjectorsGamingMotherboardsScience, Space & RoboticsStorageVideo CardsVirtual & Augmented Reality
All ReviewsAll ArticlesAudio, Sound & SpeakersCases, Cooling & PSUCPUs, Chipsets & SoCsComputer SystemsDisplays & ProjectorsGamingMotherboardsNetworkingPeripheralsStorageVideo Cards
GuidesGamingAsk the ExpertsNewsletterAboutForums
Halo InfiniteBattlefield 6Elon MuskGTA 6RTX 3080RTX 3070HDMI 2.1Bitcoin Mining
Business, Financial & Legal
Yesterday we covered a tale of Apple and the Dictionary. This is a harrowing tale of an intrepid developer against the mongering troll.
Nah not really, it is a story about a developer getting the shaft from Apple and after the internet press got a hold the story Apple back peddling.

The complete story is very long and can be found at Daring Fireball as can the follow on part of this particular drama.

After the press splashed this all over the internet Phil Schiller from Apple has written to explain that this was all a misunderstanding.
Apparently Apple did not ask Ninjawords to censor the dictionary because of the words F&(k and S^&t but because there are even MORE vulgar urban slang terms that can be found through Ninjawords.

Ninjawords could not be submitted to the App store as it was at the time since there were not parental controls at all. The developers of Ninjawords chose to edit the dictionary and resubmit. This is when all the fun started; it ended with someone thinking that Apple was requiring both the censorship AND a 17+ Rating.

I am not sure what is the truth in this one, both stories sound a little odd to be perfectly honest with you. For example in one of the actual letters about the rejection they specifically mention F*(k and Sh*& but you can find them in "Dictionary!" which is free on the iTunes store and has a rating of 4+. 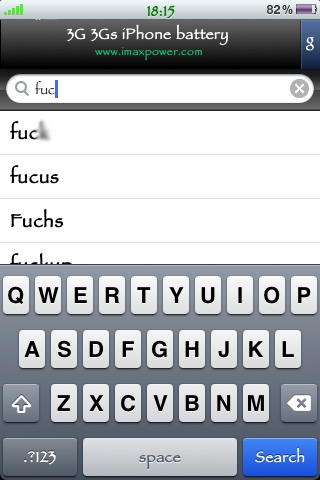