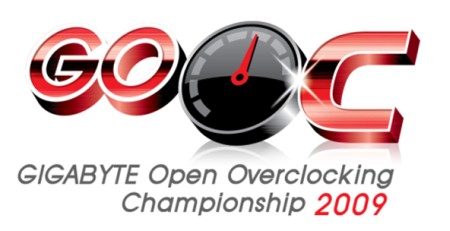 Winners from the country qualifier events will compete in the regional finals which will be in China, Czech Republic, Thailand and the USA in March and April. The winners of the regional events will then head to Taipei to compete against each other as well as last year's GO OC 2008 Best P45 Overclock and Free Style champions on June 3rd, allowing them to not only compete for title of world-wide overclocking champion, but also to take part in one of the world's largest IT tradeshows, COMPUTEX Taipei.

One of the contestants from Sweden, AKA ME4ME, has already set a new world record for maximum FSB of 714MHz using the GIGABYTE GA-EP45-UD3P and LN2.

"GIGABYTE is again glad to be able to bring the world's top overclockers together to showcase their skills and passion for overclocking excellence at this year's GO OC," commented Johnson Lin, CEO of GIGABYTE TECHNOLOGY CO., LTD. "GIGABYTE shares this commitment for excellence in every product we make, and we take special pride in designing high-end performance products that meet the special demands of the enthusiast power user.

The GO OC 2009 winner will not only gain the title of worldwide overclocking champion, but will also receive prizes valued well over US$ 5,000, including a cash reward and products provided by the GO OC sponsors. As top overclockers know, first class hardware is the key to achieving a successful record-breaking overclock. That is why GIGABYTE is proud to have industry-leading hardware vendors to sponsor this year's GO OC including Intel, NVIDIA, Kingston and ENERMAX.