In his blog he shows off a new piece of software from ElcomSoft a Russian company that is usually associated with security. Previously they have released software that is designed to recover passwords from files and systems that was Cuda Enabled. But now they have extended their support to ATi with their new Wireless Secutiy Auditor 1.0. 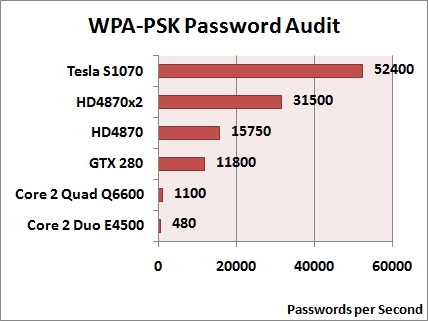 Today, ElcomSoft announced that the company expanded its support from Nvidia-only to support both ATI and Nvidia with its Wireless Security Auditor 1.0. This application is intended to audit wireless network security by "attempting to recover the original WPA/WPA2 PSK password protecting Wi-Fi Communications".
Using ATI HD2000 and above or GeForce 8 and above cards, ElcomSoft WSA is currently the fastest Wi-Fi password recovery tool on the market. In order to support both GPU manufacturers, ElcomSoft developed its own patent-pending technologies which expanded on the original CUDA-powered algorithms.