The unfortunate people to receive this life changing screen were the gang over at Gizmodo. They seem to feel that MS should revamp the BSOD and make it a little more informative.

However the issue they show in the screen is easily found; a quick search on Google and a load of information pops up everything from Logitech Keyboard issues to ATi drivers.

A funny thing though, it looks like they had at least an iPod plugged in perhaps it is not 7 to blame but iTunes...;) 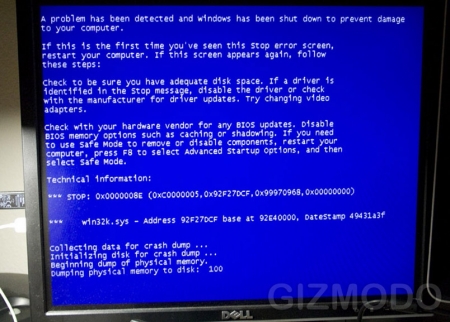 It's good to see that Microsoft hasn't bothered to change the old Windows blue screen; and by good, we mean bad. Isn't it about time to fail a little bit more gracefully? Or at the very least, in a way that actually makes sense to end-users? The error throws up the driver that caused it (way at the bottom of the error) before automatically rebooting, but actually identifying it via which type of component it is-sound, video, USB, hard drive-would be useful for people who just want to know what they did to cause it.