Windows 7 has caused quite a stir and has received more positive press than just about any other OS in MS history at this stage. Personally I find it very funny as 7 is nothing more than a Vista Kernel with a new GUI and a few basic improvements. Which makes me wonder where all of the anti-DRM fanatics are? This crowd lambasted Vista for its DRM and HDCP inclusions which are still present (and even more locked down) in 7 yet they are silent or praising 7.

To me it sounds like some hypocrisy is going on.

Theo Valich has more info on his blog here. 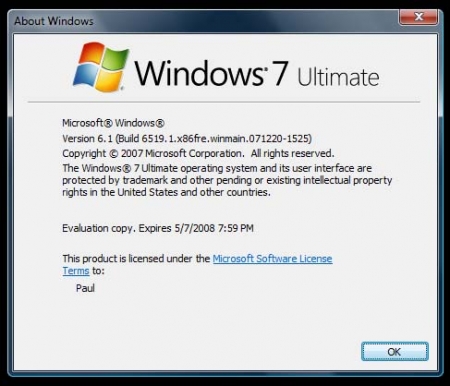 Colleagues at ZDnet also didnft stay astray; they downloaded the latest version (6.1.7000.0.081212-1400) as well, and posted a very detailed preview. Judging by their feedback, this beta is so stable that Microsoft does not need to work on W7 anymore. Given by sour taste left by Vista, I could not agree more. Cfmon Microsoft, release this baby as soon as possible.

When it comes to release date, it seems that my sources were dead right and that this operating system is on track with release in August 2009, in time for Back to School. Will we see 22 and 24 touch screens from Dell, HP and others in tandem with W7? That remains to be seen.