All NewsBusiness, Financial & LegalCases, Cooling & PSUContests & GiveawaysCPU, APU & ChipsetsDealsDisplays & ProjectorsGamingMotherboardsScience, Space & RoboticsStorageVideo CardsVirtual & Augmented Reality
All ReviewsAll ArticlesAudio, Sound & SpeakersCases, Cooling & PSUCPUs, Chipsets & SoCsComputer SystemsDisplays & ProjectorsGamingMotherboardsNetworkingPeripheralsStorageVideo Cards
GuidesGamingAsk the ExpertsNewsletterAboutForums
RTX 4090Windows 11Halo InfiniteBattlefield 2042Elon MuskGTA 6RTX 3080HDMI 2.1
Laptops
During NVISION, NVIDIA's fancy new show held just the week after IDF, Scott over at Tech Report managed to get his hands on Gigabyte's upcoming M912V netbook - he even managed to get some Gigabyte booth babes to pose for the photo and that is the type of thing we like to encourage. 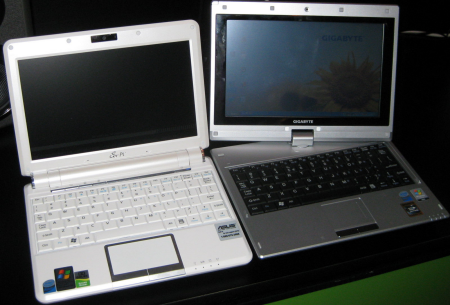 The girls are suited up in skimpy pink outfits... oh crap - focus on the tech side of it! Yes, err, well it has an Intel Atom processor, 1GB of DDR2 memory, Wi-Fi, Bluetooth, a 1.3 megapixel webcam as well as three USB 2.0 ports. Specs wise that should put it right up against most new ASUS Eee PC and performs pretty close to each other. 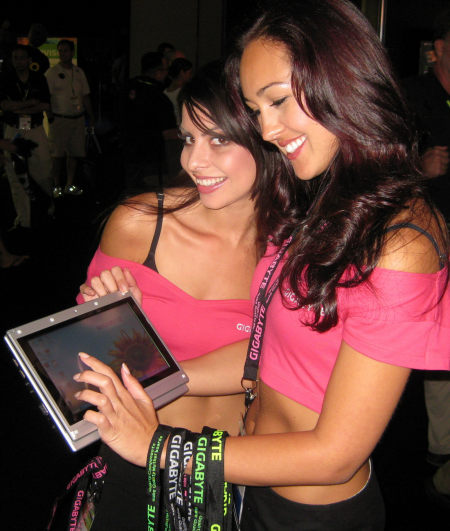 Where the M912V netbook excels is that it features a 8.9" screen with 1280x768 resolution and it is touch-sensitive, swivels 180 degrees and even folds down for tablet-style usage. According to the report, "The M912V is slated to ship next month, and will be coming to North America at a starting price of $799. The demo unit we saw had a 160GB mobile hard drive, although up to 250GB is possible. The OS choices should include the tablet edition of Windows XP and Windows Vista Basic. Prices should drop once the M912V settles into the market, although the initial price tag doesn't seem too bad considering the functionality involved. This is no cut-rate laptop, but it is a pretty well-appointed ultraportable tablet PC for well under a grand. Gigabyte may even integrate an antenna and digital TV receiver into a future version of this netbook to further sweeten the deal."

There is plenty more information and pictures over here.