Introduction and What You Need 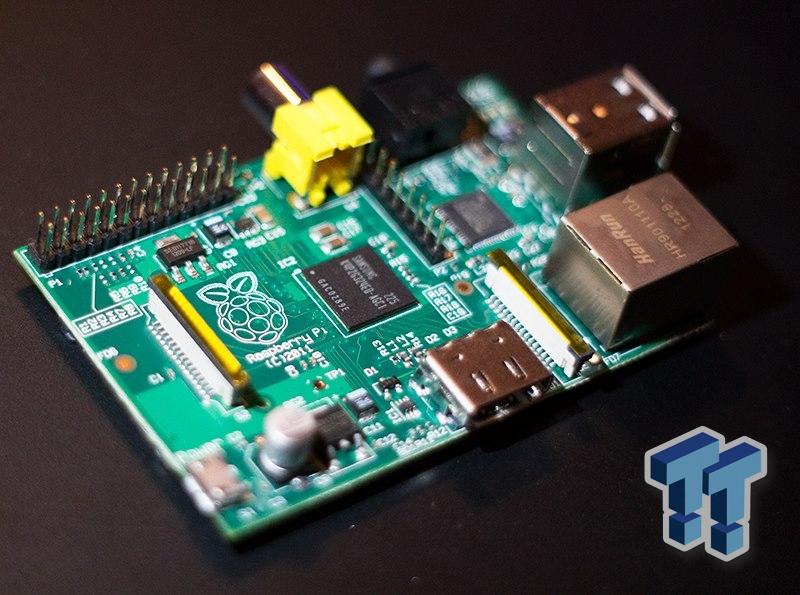 With all of the online and digital content we are consuming these days, media center PCs are quickly becoming a staple in households worldwide. Some prefer large purpose built PCs with tons of storage, while others simply settle for OEM set top boxes like the Roku or Pivos XIOS, and either of these routes will end up costing anywhere between $75 to $1000+, depending on how elaborate you wish to go. With the introduction of the small but powerful Raspberry Pi, we are able to cut the cost down to a mere $45 for an entry level streaming media center that is also online friendly.

The Raspberry Pi is a credit-card sized computer that plugs into your TV and keyboard. It's a capable little PC which can be used for many of the things that your desktop PC does, like spreadsheets, word-processing and games. It also plays high-definition video at full 720p. The Raspberry Pi model B features 512MB of RAM (earlier versions featured 256MB) and has USB and Ethernet connectivity. Video output can be achieved through a full sized HDMI port or an old school RCA video connector.

The biggest feature, however, is that the Raspberry Pi only cost about $45 shipped to your door - this makes the Raspberry Pi a formidable choice when choosing the hardware for your media center. 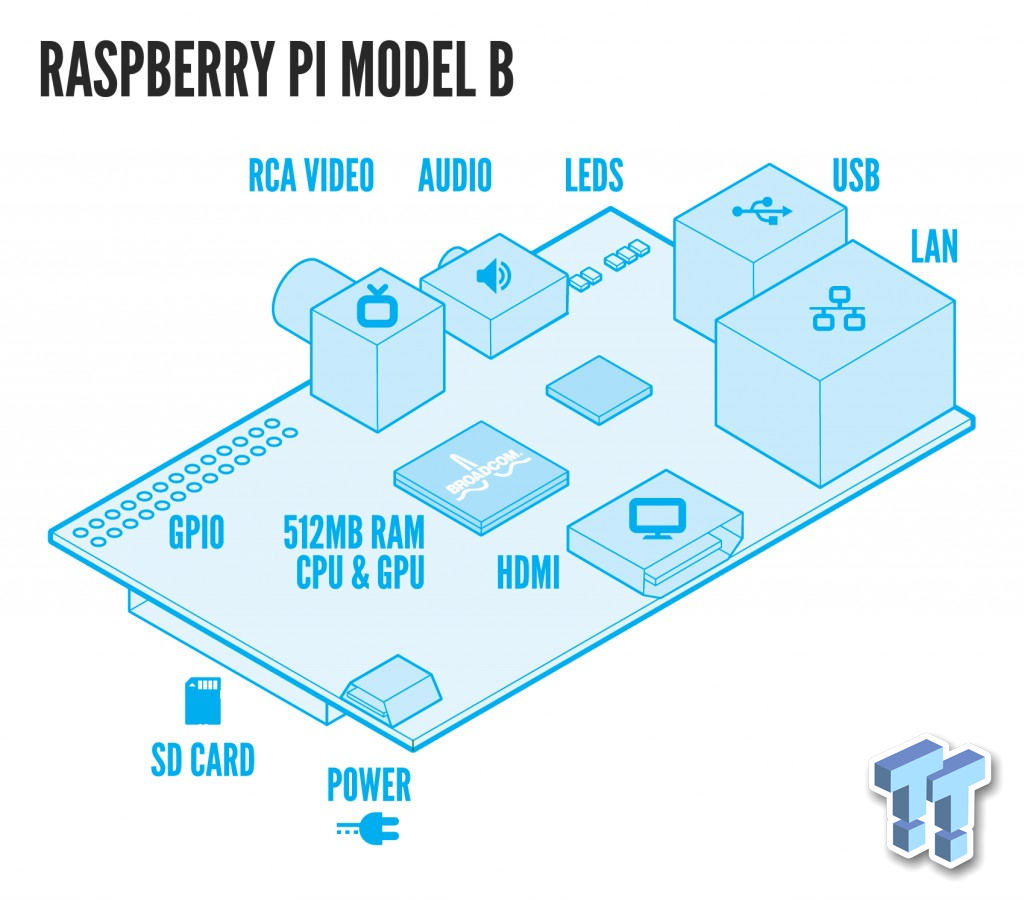 As mentioned above, the Raspberry Pi is a fully functional PC that is capable of running Linux. In fact, several custom Linux distros have been created just for the Pi, of which Rasbian is the most popular. For that reason, this is the distro we will be using today. You will need several accessories to get your media center up and running, but they are all common household items.

I have created a list below that outlines each item:

A Raspberry Pi: You can pick up one of these from your favorite electronics supply site like Element 14 or Sparkfun Electronics. A quick search will yield tons of results.

A common HDMI cable: The same kind of cable used to connect your DVD player to your TV.

A 4GB or higher SD card: This card need to be a full sized SD card and rated at Class 6 or higher.

USB Keyboard and Mouse: The ones you use for your every day PC will work fine. I recommend getting a wireless USB media center keyboard that has a built-in track pad or track ball.

An Ethernet cable: This can be CAT5 or CAT6, just make sure it is long enough to reach your router or switch. Alternatively you can use a wireless USB network adapter, but you will also need to connect a USB hub if you are using a separate USB mouse and keyboard.

A Micro USB power supply: This is the same kind of power supply you use to charge your smartphone, unless you are an iPhone owner. These can be picked up for next to nothing. Just make sure the one you purchase can support a minimum current draw of 700mAh.

An External USB hard drive: This is completely optional, but it does come in handy if you do not wish to stream video or music over your network from another device.

A copy of Raspbian and Raspbmc on your PC: Raspbian is the operating system we will be running, and Raspbmc is a version of XBMC that has been optimized for the Raspberry Pi. You can download Raspbian from here and Raspbmc from here.

MPEG2 Codec: In the event that you will be playing video content that is coded in the MPEG2 format, you will need to purchase a license from the Raspberry Pi foundation. It is quite cheap, but it is only needed for MPG2 playback. If your collection has no MPEG2 content, then this is not needed. 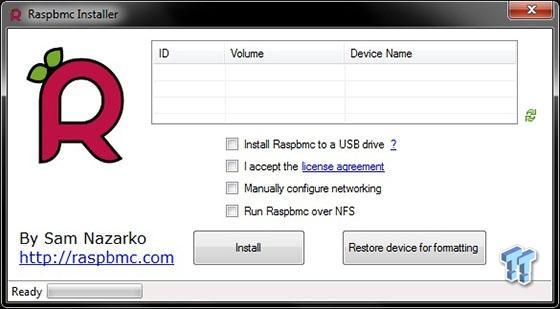 To get started we first need to install Raspbian on to the SD card. Instead of reinventing the wheel and writing a complete guide on how to do this, the Raspberry Pi Foundation has created an excellent Getting Started with Raspberry Pi guide in PDF format. I feel that this is by far the best "Getting Started" guide on the internet and would recommend that you use it.

Once you have the latest version of Raspbian installed and your Pi is up and running, we need to install Raspbmc onto the SD card you installed Raspbian on. For Windows users, this process is quite simple and just involves you downloading and installing the Raspbmc Installer. Simply download it to your desktop and with your SD card plugged into your PC, run the installer. If you are running Linux, the process is a little more complicated, and you will need to run some commands from the terminal. Mac users are able to take advantage of an installer similar to the one used for Windows.

For Linux users in the terminal type:

Once that command has been ran, you will need to run the installation script using root privileges. In the terminal type:

For Mac users I was unable to test this program out as I do not own a Mac, but after a few searches, I feel comfortable suggesting it. Simply head over to XBMC Hub and download their Raspbian Mac installer.

Now that you have Rasbian installed on your SD card, you can remove it from your PC and plug it back into the Raspberry Pi and proceed on to the next where we will connect the Raspberry Pi to your TV and begin the XBMC download process.

Before we being the XBMC installation process, it is important to note that Raspbmc is not as powerful as one of the full featured XBMC builds. It will not play Hulu, or Netflix, and super high bitrate 1080p streams will be choppy and will not play back correctly. This mostly depends on the audio quality of the 1080p video file, as well as if the stream is coming over wired or wireless LAN.

In addition, the XBMC UI will feel slower, and high resolution fan art will not load. This means that super high resolution XBMC skins will also not load correctly and in my opinion it is best to stick with the stock skin and try to stick to 720p content. 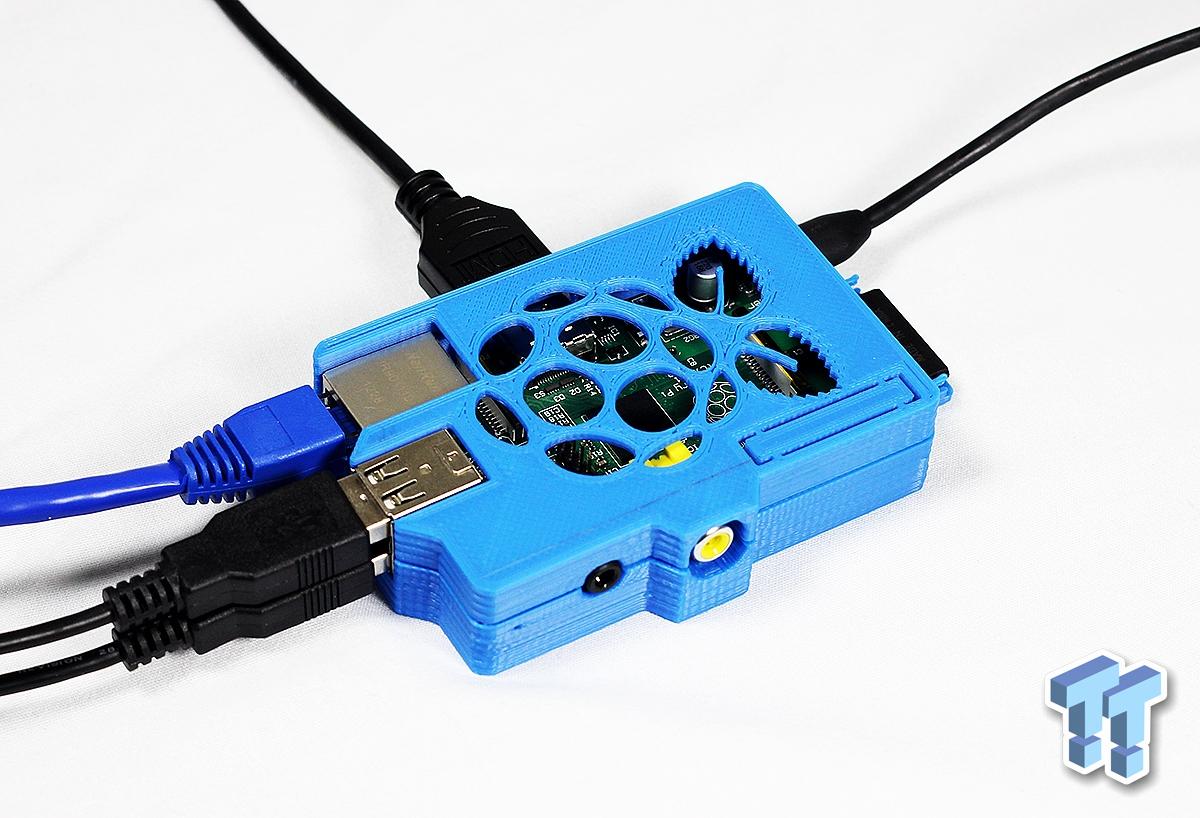 Now let's hook your Raspberry Pi up to your TV - everything should be pretty self-explanatory here. Plug the HDMI cable into an HDMI port on your TV, plug the Ethernet cable into your router, and plug the Micro USB power cable into your wall. When you plug it into the wall, it should turn on and boot up from the SD card, and at this point the installation process should begin.

This step is very much plug and play, so sit back, play some Battlefield 3 or Skyrim and come back in 15 to 25 minutes when it's finished. When it's done, it should automatically reboot into XBMC. 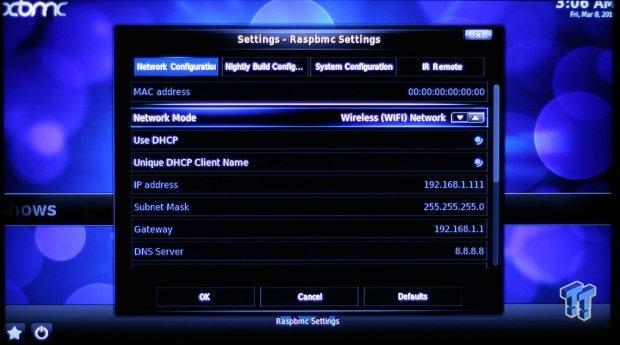 Now that everything is installed and running, we need to configure XBMC for optimal performance on the Raspberry Pi. To do this we need to tweak the following settings.

First we need to adjust the Resolution, navigate to Settings > System > Video Output. You should change this to 720p. It should help the system and menus feel a little snappier. This should only be changed if you intend on playing 720p content, though - I recommend this since the Raspberry Pi is only capable of 720p output.

Overscan can be changed if your XBMC is "stretching" past your TV's boarders. To change this, navigate to Settings > System > Video Output > Video Calibration. There you will find a wizard that will assist you in setting up XBMC for your TV's resolution.

Finally we need to ensure that your Raspberry Pi can play back MPEG2 coded video files. A MPEG2 codec license will need to be purchased from the Raspberry Pi store and enabled under Programs > Raspbmc Settings > System Configuration. With this codec you can play MPEG-2 videos, which the Pi does not support out of the box. If you don't have any MPEG-2 videos, you can skip this, but I recommend purchasing it as the codec cost less than $4, and it will enable you to use MPEG2 in the future.

Once you have everything configured, you can map out your media shares as you would on a normal install of XBMC, or you can set up something like a dedicated media server that runs unRAID, and handles media streaming via Plex Media Server, which I personally love.

Win a TweakTown Edition Blue Case for Your Raspberry Pi! 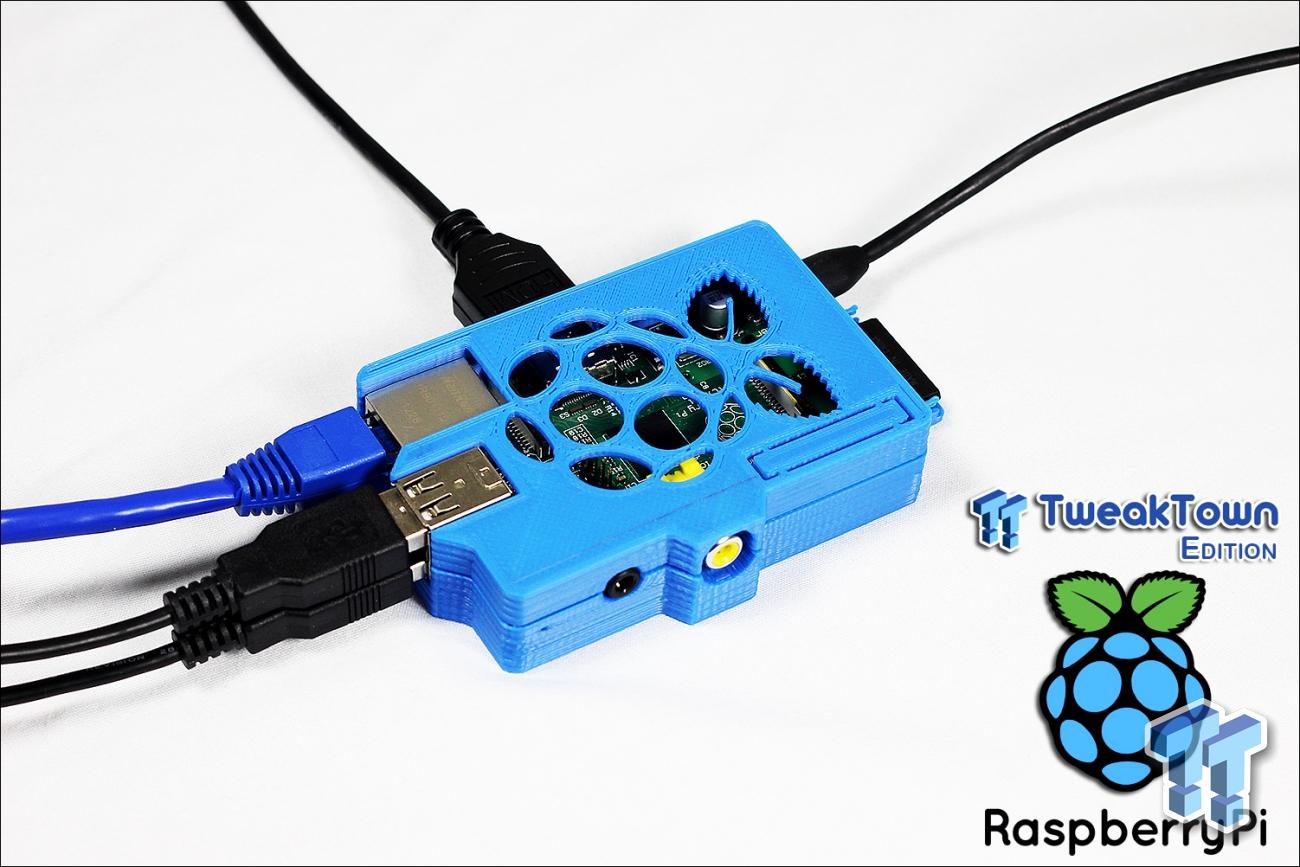 How sweet would it be if you could own the awesome TweakTown blue case we used on our Raspberry Pi in this tutorial? I know, right? It would be AWESOME and I really do want you to have it!

All you have to do is leave a comment below about our tutorial and we will pick a winner at random two weeks from the day this article posted. Unfortunately the actual Raspberry Pi and cables shown in the photo above are not included, but the only thing more awesome than a Raspberry Pi is a TweakTown blue case for your Raspberry Pi.

The contest is open worldwide so everyone has a chance to win and we cover the shipping cost! For your entertainment, I have included a video below of the case being printed on my Lulzbot 3D printer.