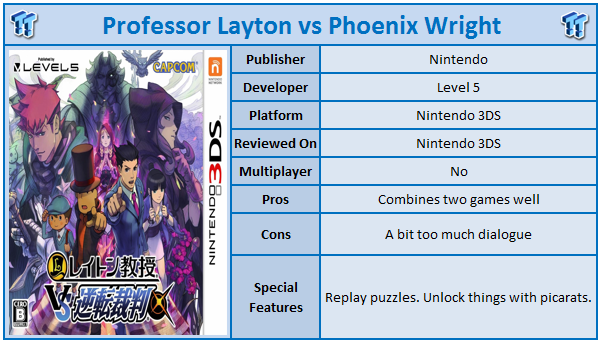 It's fair to say that the Professor Layton and Ace Attorney franchises have been one reason why the DS and 3DS systems have been so popular over the course of their lifetimes. Both requiring thinking and puzzle solving, they are the perfect game for the casual gamer to pick up and play on a long commute or whilst having a relaxing time at home. Someone at Level 5 thought it would be a top idea to put the two franchises together into one game, and so we lead to today where one of the most popular games in Japan has made it to the west.

Both franchises have their strengths and weaknesses, but when combined, can they overcome their problems or is it just a ragged mess? Thankfully, it's one of the better 3DS games we have played, with a few caveats.

The storyline picks up with Layton visiting London with his series sidekick Luke and Phoenix also being in town for a legal convention. The two cross paths when trying to assist a female who they find wandering London town. However, all is not right with this female, and through a course of events, they end up in Labrynthia, an alternate world where a character known as The Storyteller dictates what happens. From here it is up to Layton and Wright to combine to solve the overall puzzle of the town and free themselves and their friends from its foes. 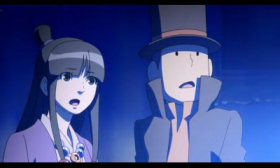 When this game was first announced, the anticipation was that it would basically be the player being tasked with solving a number of lateral thinking or visual puzzles before then going to court and fighting out a few battles. In no surprise whatsoever, this is exactly what we have with this game and in some ways this is a bit disappointing. There is no point in the game where the puzzles of Layton intersect with the court case; instead, the Layton part of the game replaces the 'investigation' phase of the Phoenix Wright games with Layton able to find hint coins and solve puzzles to unravel the stories. If you are a fan of both games, however, you will think this is absolutely brilliant.

But if you are not, this may be a bit disappointing. We don't know why we couldn't have had a lateral thinking puzzle in the middle of the cases, but instead it feels like two very different silos playing out one after the other. The storyline does bring the characters together, but the gameplay really does not. It does allow you to focus a lot more in the cases on the evidence being provided, and the hint coin being available from Layton during the cases is a masterstroke that should be carried over to the mainline Phoenix Wright series. 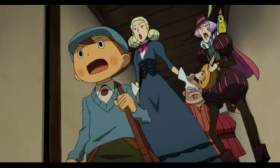 The other issue is that these games have always been known for their visual novel style, and this rings true again in the combined title. However, it does mean there is a lot more exposition than usual and this leads to a lot of lengthy dialogue sequences which can drag. There are some sections where it is more than ten minutes before you get another crack at a puzzle or case section and, for a portable game, that is quite annoying when commuting, for example.

Moving beyond the issues with the game, you find a very solid title that really has encapsulated what makes the two franchises feature such awesome portable games. Gaining the correct objection is just as satisfying as solving a difficult puzzle, and this is a game that will make you think. Although, we did find that on both sides of the game the puzzles/cases seemed a little easier than usual. One major change on the Phoenix side is that you often have to cross-examine multiple witnesses to the case during the same sequence.

This has allowed a new mechanic to be developed where you have to keep an eye on how the other current witnesses are responding to the current testimony and try and catch them out. It works well, and the game gives you an aural hint as to when this is required. 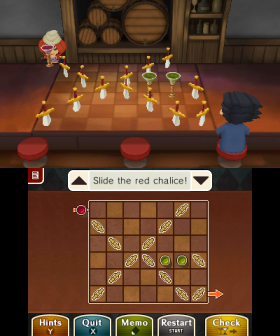 Like in the Layton games, you earn Picarats based on how quickly you can solve a puzzle and these unlock items when the game is finished. As well as this, you get around five chances to make mistakes during a case before game over, so the risk/reward system of both games has been ported to this new title and again it works well. 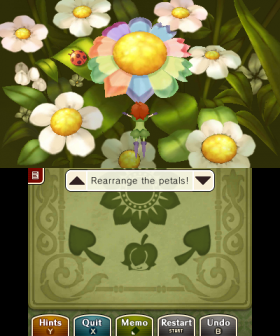 The controls of both games also flow well to this title with the stylus the dominant weapon for both characters and, along with this the visuals of both franchises, suit each other as well. Even though you are jumping between what really amounts to two games, the visual style does not miss a beat, and the anime style cutscenes present really are some of the best seen in the franchises to date. Voice acting is done well with the soundtrack backing up the current mood of the game well.

Professor Layton vs Phoenix Wright is a game that many may not have predicted, but it has turned out to be a fantastic title. Combining the series has had its issues, such as too much dialogue being present and the lack of Layton puzzles being available during the cases, and they were a bit of a missed chance, but overall the two characters fit the game well. It wouldn't surprise us to see these characters in tandem again based on this first title, and as a start, this is a quality, solid release that really anyone who likes a good puzzle would do well to pick up.

PRICING: You can find the Professor Layton vs Phoenix Wright 3DS Game for sale below. The prices listed are valid at the time of writing but can change at any time. Click the link to see the very latest pricing for the best deal.